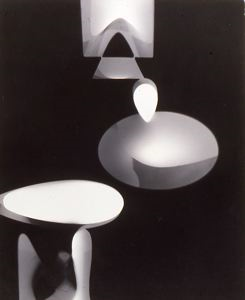 In the 1920s, photography expanded to include a wide variety of inventive new techniques and styles. In this spirit of experimentation, many artists turned to cameraless photography, a process first discovered around 1834 by William Henry Fox Talbot, who characterized his experiments as âthe art of photogenic drawing.â The result of direct contact between object and photosensitized paper, âphotogramsâ feature silhouetted, unavoidably flat imagery with more visual affinities to abstract painting of the time than representational photography attempting to capture volume and three-dimensional space. The relationship between figure and ground resembles that of photographic negatives in that objects protect areas of the paper and thus appear light, whereas the empty spaces around them are depicted by darkness. While Man Ray is credited with first introducing these experiments with light and shadowâârayographs,â as he referred to themâinto the realm of modern art, other artists, such as Theodore Roszak, Konrad Cramer, and Gordon Bensley featured in this gallery, were also drawn to the effects of light and matter on chemically treated paper.

Your current search criteria is: Exhibition is "American Abstraction from the Addison Gallery of American Art".