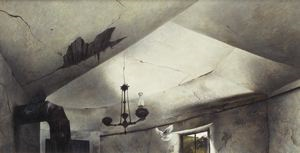 Andrew Wyeth first exhibited this picture of an abandoned church in a one-artist show at the Macbeth Gallery in 1945 under the title âNegro Church.â Shortly after purchasing it from the exhibition, the Addison's director, Bartlett Hayes, wrote the artist requesting permission to change the title to âChurch Ceiling.â1 In agreeing to the change, Wyeth informed Hayes that the church was known locally as Mother Archie's Church, after the preacher who had founded it in the early 1800s. The resulting variety of possible titles led to a contest in March 1946. Phillips Academy students were asked to describe in âtwenty-five words or lessâ the reason for their choice of one of three titles: âNegro Church,â âChurch Ceiling,â or âMother Archie's Church.â2 Alternative suggestions were also welcome. While the Addison's archives lack any record of the outcome, one must assume that the winning entry made a persuasive case for the title that the painting now bears: Mother Archie's Church.

Like all of Wyeth's paintings, this early work depicts a place with which the artist is intensely familiar. The octagonal stone church, now reduced to its foundations, was located within walking distance of his studio in Chadd's Ford, the Pennsylvania town where he has lived all of his life. As a boy he often wandered over to the church on Sundays âto hear the chatter of Negro songs and voices rise up from the building during services.â3

Often the impulse to paint the scenery around him hits Wyeth unexpectedlyââa sort of accident in the right spot.â4 According to Thomas Hoving, "Chance, the odd happenstance, the abrupt appearance of life where before there was stillness or death is of critical importance to Wyeth the painter.â5 This is borne out in Wyeth's account of how he came to paint Mother Archie's Church:

Late last Spring, 1945 a shower caught me and I ducked in the back window of this old building. The big room was cluttered with the remains of long church benches, dried palm leaves, a faded purple Bible on a stand and an elaborate square piano. Suddenly a whirring sound broke the silence as a pure white pigeon flew in the broken window and roosted on a stove pipe with a dark grey blue pidgeon which I hadn't even noticed before. The white pigeon against the damp grey plaster ceiling was startling in its beauty and so I was first fired to do a tempera to somehow put across the feeling I had of the lush Spring landscape (as seen through the window) outside that momentarily gave up the immaculate white pidgeon so that it could also seek shelter in the musty beauty of the old church.6

The sudden appearance of the white bird allowed Wyeth to discover something new in a familiar place. The painting is thus a combination of fresh impressions and old memoriesâboth deeply personal and subjective.

At first glance, Wyeth's private feelings and associations seem masked. His realistic style and his use of the exacting and time-consuming medium of egg tempera are means of avoiding what he himself says is the "messiness" of his true nature.7 Yet his paintings are not merely records of fact. In creating his compositions, Wyeth consciously chooses elements that allow the viewer to catch a glimpse of his personal responses. One need not know of the artist's experience that spring afternoon to sense his excitement at witnessing the bird fly into the abandoned building, an excitement conveyed in the striking contrast between the vivid green seen through the window and the bleached-out gray of the interior. Similarly, it is not necessary to know the history of the church to sense the presence of past occupants, as epitomized by the rusty stovepipe and extinguished oil lamp.

The simplification of the scene to essential details is evidence of a strong abstract element often overlooked in Wyeth's work. Modernist devices such as the unusual angle and cropping disorient the viewer and endow this seemingly naturalistic image with an air of otherworldliness. Denied any firm grounding, the viewer, like a displaced spirit, looks down at the window while also looking up at the ceiling. The psychological tension is heightened by elements such as the window and the cracks in the plaster ceiling that bleed off the edges of the painting, simultaneously drawing the eye into and out of the composition.

The painting's disconcerting effects lead the viewer away from the particular to the universal. Compositional elements become symbols for the ephemeral as well as the perennial nature of the world. Finding larger truths in the ordinary is a hallmark of Wyeth's art, reflecting his strong belief that the âcommonplace is the thing, but it's hard to find. Then if you believe in it, have a love for it, this specific thing will become a universal.â8

6. Wyeth to Hayes, 13 February 1946. This letter was written in response to Hayes's question about the resemblance of the white pigeon to traditional symbols of the Holy Spirit. While Wyeth did not directly address Hayes's question, he responded by emphasizing the pedestrian aspects of the painting while avoiding its religious aspects.

Your current search criteria is: Exhibition is "Nothing is Certain But Change".