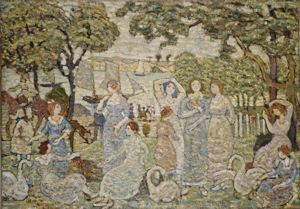 Maurice Prendergast's life coincided with an era of enormous change in artistic styles in Europe and the United States. Trained in Paris in the 1890s, when the work of the Impressionists and the Post-Impressionists was still controversial, Prendergast rapidly developed his own style as a watercolor painter. By 1895, when he returned to Boston, he was capable of producing charming pictures that were almost overnight sensations with local collectors. A less creative artist might have been content to spend the rest of his career producing thousands of these readily salable pictures of strollers in the Boston parks, but Prendergast was interested in developing his own personal vision to a greater degree. As his work evolved, it became less rooted in reality, more abstract and more complex. Despite a decline in the sale of his pictures, he persisted in following his own path, which eventually lead him to leave Bostonâhe would have starved if he had stayed, his brother Charles would later comment1âfor New York, where collectors and art dealers were more receptive to new styles of painting. In the last ten years of his life, Prendergast developed a modest following among these more adventurous collectors.

The Addison Gallery's important collection of thirty works by Prendergast not only documents the development of his style but also includes some of his finest realizations. Sketches in Paris, a series of seven delicate oil sketches painted on panels each roughly 6 by 4 inches, are typical of the rapidly executed pictures that Prendergast made during his years as a student in Paris in the 1890s. To viewers familiar with the artist's work, they prefigure his later oil paintings in which the abstracted figures lack faces, fingers on their hands, and other details. But these sketches are of the kind produced by many art students in Paris at the timeâstandard painting exercises done to learn how to capture quickly the essence of an outdoor scene. Never intended for exhibition, they were actually assembled and framed as a group by the artist's brother Charles sometime before the Maurice Prendergast exhibition at Kraushaar Galleries, New York, in 1933.2

Float at Low Tide, Revere Beach, a watercolor that dates from just after Prendergast's return to Boston from Paris, has a modernist quality. The subject of the work is not really the float, but the reflections in the water. The artist's facility in rendering water is further demonstrated by his paintings of Venice, as in the Addison's watercolor, Venice, which shows the Ponte Apostoli and, suspended above it, a striking red flag with the lion of St. Mark. In the Venice watercolors, the architecture has a solid, substantial quality, while the strolling tourists seem simply to be placed as decorative spots of color to enliven the design.

a href="http://accessaddison.andover.edu/Obj918">In Central Park, New York is from a series of watercolors that Prendergast made just after the turn of the century, as he was beginning to exhibit at the Macbeth Gallery in New York. Macbeth first wrote inviting Prendergast to exhibit while the artist was in Venice. Charles Prendergast answered the letter and certainly communicated with his brother,3 who accepted Macbeth's invitation. Perhaps at the suggestion of his new dealer, Prendergast, upon his return from Europe, created a series of New York scenes, largely of Central Park, that parallels the series done in the previous decade in the parks and at the beaches near Boston, works that had found their way into many Boston collections and had brought the artist repeated praise from local reviewers. The gamble that the Central Park series would fill a similar niche in New York collections did not, however, payoff. While they were later prized by collectors and museums, these scenes had little appeal to the New Yorkers who were purchasing pictures in the early years of the century.

The Central Park series is perhaps the last group of watercolors that Prendergast created with a market in mind. Increasingly, his watercolors and, more especially, his oil paintings grew less rooted in reality. The hallmarks of modem lifeâautomobiles, skyscrapers, trainsâare left out of Prendergast's city paintings. As life became more mechanized and industrialized, Prendergast created scenes of an increasingly unreal world of abstracted, often stylized figures in dreamlike landscapes. One might be tempted to see this trend as an indication that he was personally becoming less in touch with the world around him. But in contrast to the growing distance from reality in his paintings, Prendergast was increasingly involved in the New York art scene; thus, the choices he made in his own work were conscious, stylistic ones, not evidence of a lack of connection with modern life. It was, in fact, his connections with the art world that made it possible for Prendergast to pursue his own explorations. Despite the lack of ready appreciation from collectors, he had moral support from other adventurous artists in New York and from his dealers, who continued to show his work in the years when it did not sell; financial support was provided by the small but steady income that the Prendergast brothers earned from making hand-carved picture frames.

The Swans is among the masterpieces of Prendergast's later style. It shows no real place or event but an imagined scene, with women and swans posed in a landscape: patterns of color in a thick, hazy atmosphere. In late nineteenth-century French Symbolist painting, women were often depicted in a generalized landscape with creatures that had mythological meaning; swans, for example, would represent Zeus, the Greek god, in the form that he had assumed to seduce Leda. Prendergast adopted the subject matter found in French painting and organized the figures in a frieze in the foreground as in the work of Puvis de Chavannes or Paul CÃ©zanne, artists he is known to have admired; but he used his own technique of paint applied in short brushstrokes layer over layer on the canvas. The narrative element becomes irrelevant, and the figures with their constructed poses are placed to make echoing curves across the picture plane. Works such as The Swans are ultimately compelling in their own right: they tell no stories, document no places, but draw the viewer into their web of pattern, into the ambience of the painting itself.

Your current search criteria is: Exhibition is "Maurice Prendergast: Learning to Look".