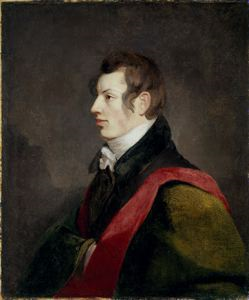 As was true for many nineteenth-century American artists, Samuel Morse painted portraits in order to support himself while dreaming of creating great historical works. He had some success in the latter pursuit with his large paintings, meant for public display, such as The House of Representatives (1822-23, Corcoran Gallery of Art, Washington, D.C.) and Gallery of the Louvre (1832-33, Terra Foundation for American Art, Chicago). But his ultimate failure to receive a commission from the United States government for a work for the rotunda of the U.S. Capitol building led to his early retirement from painting in 1837. Up to that point, he was unable to give up the painting of portraits and executed many of them during a professional career which spanned almost thirty years, from his student days in England in the 1810s to his early retirement. His ultimate talent for, and achievement in, portraiture is witnessed by his lifesize, full-length image of marquis de Lafayette (Art Commission, City of New York, City Hall), unveiled in 1826 to great acclaim.

One branch of the genre that he does not seem to have explored with any frequency, however, was self-portraiture. Indeed, his daughter Leila, to whom he gave the Addison's painting, erroneously believed that it was the only self-portrait her father had ever painted.1 In fact, by the time he created the Addison's picture, Morse had painted his own image at least twice, executing both earlier portraits around 1809. One of these is actually part of a group portrait of the Morse family in which the artist appears with his parents and siblings (National Museum of American Art, Washington, D.C.). The second is a much smaller image of the artist alone, painted with watercolor on ivory and in the collection of the National Academy of Design, New York, an institution of which Morse was a founding member and first president. Chronologically, a preparatory oil sketch for the Addison's portrait (National Portrait Gallery, Smithsonian Institution, Washington, D.C.) comes next, followed by the Addison's painting itself.2 Finally, one other self-portrait may exist; the figure in the center foreground of Morse's large Gallery of the Louvre has been identified by modem historians as the artist himself.3

To summarize, then, the National Academy's portrait and the Addison's, with its presumed oil sketch, are the only self-portraits by Morse in which he appears alone. Although these images were executed not more than three or four years apart, a comparison of them reveals a change in Morse's style and, of greater interest, a change in his attitude toward himself. In the earlier work, a bright-eyed, rather perky youth (some eighteen years old) looks directly out of the painting at us as he proudly displays the tools of his trade, a brush and palette, which he is actually using as we watch. In the later portrait, he has matured (he is now about twenty-two) and has become a more obviously sober, although not somber, professional. Here the artist has placed himself in the strict profile view of the typical Early Renaissance portrait, a position which implies stability and solidity, and which is also a feature of the Neoclassic style that still held sway in England and America in the early nineteenth century.4

The Addison's painting was executed in London, probably beginning in 1812 when the artist wrote to his parents: "I shall soon begin a portrait of myself and will try and send that to you."5 Morse had arrived in England the previous year, having traveled there in the company of his friend, teacher, and mentor, Washington Allston. No artist had a greater impact on Morse in his youth than did Allston, and it is not surprising that the influence of the older man can be seen here. This time, for example, Morse did not include any attribute, such as palette or brushes, that would identify him as an artist. In this, he follows Allston's lead as seen in the latter's Self Portrait of 1805 (Museum of Fine Arts, Boston), an image which Morse would almost certainly have known. Allston made no specific reference in this painting to the fact that he was an artist. Instead, he depicted another kind of attribute: his Phi Beta Kappa pin, a mark of erudition and academic accomplishment. Similarly, Morse shows himself in what appears to be a red-trimmed academic robe. If that is indeed what the artist is wearing here, it can certainly be equated with Allston's pin as an obvious sign that the subject has pursued and obtained a higher education (Morse, who attended Phillips Academy from 1799 to 1805, graduated from Yale in 1810).

Another link to Allston can be seen by comparing Morse's portrait of himself to Allston's of Francis Dana Channing (1808-09, private collection). As has been pointed out elsewhere, the two images are compositionally close, with both men in profile, facing to the left.6 It seems likely that Morse had the Channing portrait in mind when he positioned himself for his own. If Allston's works influenced Morse, then perhaps Morse's influenced others. For example, affinities have been noted between this self-portrait and the slightly later self-portrait by Charles Robert Leslie (1814, National Portrait Gallery, London), with whom Morse shared rooms in London.7

In about 1865, Morse gave the Addison's painting to his daughter Leila, who hung it in her room at Locust Grove, an Italianate house overlooking the Hudson River near Poughkeepsie, New York, which the artist had bought and enlarged for his family in about 1847. The picture remained there until 1881 when Leila married; she moved first to Europe, then to Washington, D.C., and then back to Europe, taking the portrait with her on these journeys. Obviously, she was not exaggerating when, in 1929, she wrote that the painting "has been one of my most precious possessions.â8

3. David Tatham, "Samuel F. B. Morse's Gallery of the Louvre: The Figures in the Foreground," American Art Journal 13 (Autumn 1981), pp. 38-48; Kloss, pp. 128-29; Paul J. Staiti, Samuel F. B. Morse (Cambridge: Cambridge University Press, 1989), p. 193. It should be noted, however, that other than the visual evidence, there is no firm proof that this is in fact a self-portrait by Morse. It was not identified as such by any of Morse's contemporaries, which seems like an odd lacuna.

8. Leila Morse Rummel, Paris, to Thomas Cochran, 9 January 1929, typescript, Addison Gallery Archives. A drawing or engraving of the portrait by Violet Oakley appears in her Samuel Finley Breese Morse: A Return of the Spirit of Leonardo, Marriage of Science and Art (Philadelphia: Eldon Press, 1939), p. 4. Addison Gallery Archives indicate that, in 1950-51, the portrait was copied by Fred Wright of Cambridge, Maryland, for J. J. Ryan, a descendant of Morse.

Your current search criteria is: Exhibition is "Masterworks from the Collection: 50th Anniversary Exhibition".