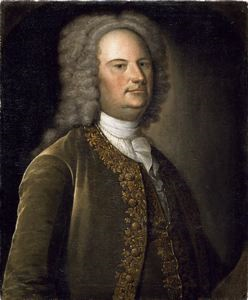 The three portraits of Addison family members owned by the museum provide an intriguing picture of mid-eighteenth-century artistic patronage in Prince George's County, Maryland and document the history of the family for whom the Addison Gallery of American Art is named. This portrait by Gustavus Hesselius and two others were given to the Addison Gallery in 1944 by Elsie Cobb Little, Zaidee Cobb Bliss, daughters of Keturah Addison Cobb to whom the Addison is dedicated, and their cousin, Mary Addison Ingle. The three portraits represent members of one of Maryland's most prominent families in the eighteenth century. Colonel John Addison, the founding member of the family, had immigrated from England to Prince George's County in 1667. Through land grants, purchase, and marriage (in 1676-77 he married Rebecca Wilkinson who brought as dowry the extensive land holdings of her first husband Thomas Dent), John Addison amassed one of the most significant tracts of land in Maryland on the eastern side of the Anacostia River, across from the present-day city of Washington.

This portrait of an elder member of the Addison family is credited with assurance to Swedish-born Gustavus Hesselius (1682â1755). In question however is the identity of the sitter. Family history asserts that this is the first John Addison. However, Colonial John died during a trip to England in 1707, five years before Hesselius immigrated to Philadelphia. Additionally, this designation is flawed, as colonial scholars of the 1940s argued, because the richly ornamented velvet coat and the cravat of the sitter did not come into fashion until the 1720s. It thus seems likely that the sitter, a man of middle age, is in fact John's son, Colonel Thomas Addison (1679â1727), who would have been in his forties during the years 1720â1728 when Gustavus Hesselius lived in Maryland. The Oxford-educated Thomas, like his father, was a member of the Council of Maryland, and a Colonel in the militia. Also like his father, through marriage he allied himself with other important Maryland families strengthening both his wealth and position. Indiscussing Hesselius and his portrait of Thomas Bordley [c. 1725, Maryland Historical Society] in light of the few Maryland portraits, historian Wayne Craven asserts "Unless additional works or documentation of portraits come to light, we can only conclude that Maryland was not a rich center for the creation of portraits before 1750." H so, this portrait of Thomas Addison becomes particularly rare. Its mere existence attests to the wealth and status of the Addison family in Maryland society of the early eighteenth century.

Your current search criteria is: Exhibition is "Likeness of America, 1680â1820".