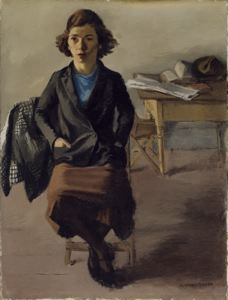 Russian-born Raphael Soyer (1899â1987) emigrated to the United States in 1912 at the age of thirteen. One of three sons encouraged to sketch and paint by his father, Soyer began formal art training as a teenager at New York's Cooper Union, later studying at the National Academy of Design and the Art Students League. After completing his academic endeavors, Soyer initially painted ordinary scenes from his life in a colorful, flat, naive style. Inthe thirties, he became a strong advocate of realism, stating, "the content of my art is people . . . I choose to be a realist and a humanist in art." Throughout his life he continued to work in a naturalistic, representational mode.

One of Soyer's primary concerns was expressed in his paintings of women in which he demonstrated sensitivity to his female subjects and an interest in their physical environments. Of these works, Soyer scholar Lloyd Goodrich wrote, "his women are seen with warmth and intimacy, and a note of sentiment. There is nothing of the voyeur in him. One feels that these women must somehow be close to him, not the usual professional models but friends, women he knew well." Subdued in color and tone, the mood of images such as Mina is quiet and introspective. Soyer captured th character of his sitter, a young immigrant from Galacia, Poland, through careful observation of her individual body shape. The painting evokes a sense of profound sympathy between the artist and his model. Inthis complex composition, Soyer has focused on the interrelationship of the figure with the surrounding objects, space, and light. Two other versions of this painting were completed, one is in a private collection and the second, in the Metropolitan Museum of Art, portrays its subject in a state of dark, psychological tension. Currently, Mina is ninety years old and lives in New York City with her daughter.
Sarah Vure