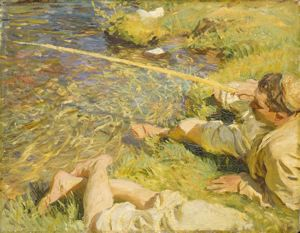 John Singer Sargent was a cosmopolitan: his parents were well-to-do Americans who raised a family in Europe, mostly in Italy, Switzerland, and France; born in Florence, he was fluent in several languages and as passionate about music as he was about art. After a professional training in Paris (1874-78), Sargent won international acclaim at the annual Salon exhibitions with his imaginative, dashingly painted portraits and genre scenes. In 1886 he moved permanently to London, where he became the portraitist most favored by socialites, celebrities, and members of the ruling class. Rodin dubbed him "the Van Dyck of our times" in 1902.1

Sargent turned fifty in 1906, which was roughly the period when he painted Val d'Aosta: A Man Fishing. Feeling the burden of his success, he was accepting fewer portrait commissions and made a habit of leaving England on late-summer painting holidays, often spending the first part of the trip in the Alpine countryside that he had learned to love as a youth. On these occasions Sargent indulged in his one sure antidote to formal portraiture: he painted bravura oils and watercolors to celebrate informal moments and savor fleeting visual pleasures. He probably executed Val d'Aosta: A Man Fishing during a stay at an inn in the remote hamlet of Purtud, near Courmayeur.2 Although the title names the valley in the Italian Alps extending west of Aosta to the foot of Mont Blanc, the imagery connects the work to a group of fanciful pictures that evoke a vaguely Oriental world of blissful idleness. This example presents two men reclining in dazzling sunlight by the side of a shallow stream. The fisherman holds his rod in one hand and dangles one foot in the water; his loose clothes and brightly colored cap suggest traditional Turkish costume. Although the other figure is represented only by his legs, he brings an element of surprise and humor, while serving as an important formal device in the unconventional composition. The mood of the picture can be described by an Italian expression for the pleasure of doing nothing: dolce far niente.3

When painting Val d'Aosta: A Man Fishing Sargent positioned his models at his feet, giving the viewer the sense of standing over the two men and looking down on the water. From this vantage point the fisherman's chest is not visible and his limbs are foreshortened. The artist resolved this challenge with seemingly effortless accomplishment, setting the head and shoulders in dramatic relief from the rest of the body. He cropped his composition tightly and showed no horizon line, forcing the viewer to scrutinize the two bodies, the play of strong sunlight and shadow, and the lively movement of the stream. After studying and collecting the art of Monet in the 1880s, Sargent developed his own "Impressionist" style of mimetic brushstrokes for such outdoor motifs as rippling water and lush vegetation. The long, flickering strokes that evoke these elements in Val d'Aosta: A Man Fishing contrast with the carefully encrusted paint that depicts the spots of strong light on the men's legs and on the rocks near the top of the composition.

Sargent's valet, Nicola d'Inverno, was the model for this painting. He is recognizable as the fisherman, and may have assumed the pose for the legs of the second figure. In another painting from the same group (The Chess Game, c. 1907, The Harvard Club of New York City) Nicola wears a more exotic costume, including baggy crimson trousers; he lies beside the stream, with his legs crossed in roughly the same manner as the foreground figure in Val d'Aosta: A Man Fishing. The artist's holiday companions obligingly acted out such scenarios, posing in the costumes he had brought from London.4 Sargent was charmed by this idyllic place and its brook, which he also enjoyed painting without human beings: for example, Alpine Pool (c. 1909, The Metropolitan Museum of Art, New York) records a moment of quiet stillness when the light is low.

2. He first visited Purtud in 1904 with two Italian artists, Carlo Pollonera and Ambrogio Raffele. In 1905 the bachelor artist stayed there with a group of relatives and friends, returning with a large party on several occasions before war broke out in 1914.

3. Sargent used the Italian expression for the title of another painting with "Oriental" figures: Dolce Far Niente (c. 1907, The Brooklyn Museum, New York).

4. For example, The Brook (c. 1907, collection of the Ormond Family) depicts two demure beauties in flowing Oriental robes, reclining in reverie beside the same Alpine stream; the models were the artist's adolescent nieces, Reine and Rose-Marie Ormond. Sargent's holiday props included Turkish costumes, splendid, old-fashioned Victorian dresses, bonnets, and shawls, and even a stuffed gazelle, which he depicted twice in The Hermit (c. 1908, The Metropolitan Museum of Art, New York).