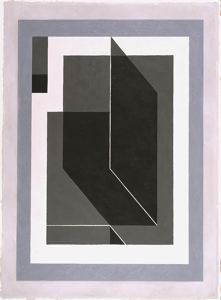 In June of 1933, the Gestapo padlocked the doors of the Bauhaus School in Dessau. Seven faculty members had remained with the institution even after it had been closed through government pressure the preceding year, but nowâunder the leadership of director Mies van der Roheâthey voted unanimously to shut the school forever. That autumn, Josef Albersâone of those seven teachersâwas the first of the group to find refuge in the United States.

Albers and his wife, Anni, a pioneering textile artist, were brought to America thanks to the efforts of Philip Johnson and Edward Warburg, both of whom were associated with The Museum of Modern Art in New York. Warburg initiated and funded, and Johnson helped to arrange, a key teaching position for Albers at the newly formed Black Mountain College in North Carolina. They also supported the artist in other ways. In a letter dated 19 October 1934, Albers wrote Addison curator Charles Sawyerâwho would subsequently become one of his closest friendsâto say that he had learned through Warburg's secretary that the Addison would be exhibiting his woodcuts in the New Year. In surprisingly succinct English, given that its writer knew scarcely a word of the language when he had emigrated less than a year earlier, Albers wrote, "I am glad to hear of this and want to thank you so much for your interest, because it is very difficult to obtain public interest in Abstract Art."1

The felicitous connection between Albers and the Addison continued. In 1939, Albers's paintings were shown in the Gallery, and in 1941 another eighteen paintingsâwhich had been on view at the Nierendorf Gallery in New Yorkâwere presented there. One of these was Bent Black (A), which was acquired for the Addison two years later.

Bent Black (A) was in many ways a culmination of Albers's forays into abstraction at that time. Ever since his arrival in America, the artist had been enjoying his freedom to explore new ways of paintingâapplying pure pigment straight from the tube in lively, nonreferential form; working textures this way and that; pursuing a range of simple and vibrant shapes. As he had in sandblasted glass at the Dessau Bauhaus, he played black, white, and gray against one another, juxtaposing negative and positive forms, achieving pulse and rhythm. Bent Black (A), along with several related paintings and studies, represents the earliest instance of Albers's deliberate use of equal quantities of different colors in a single work. Albers organized the composition so that there are precisely the same number of square centimeters of each color: black, dark gray, light gray, and white. This strict system serves a number of purposes. For one, it employs restrictions of the sort Albers enjoyed imposing on himself. He felt that tough formal rules, as in the poet's sonnet and the composer's sonata, by their very nature imparted harmony to the end results. He did not expect viewers to read the system precisely, but rather to gain a sense of order and regularity through it.

Additionally, the use of equal amounts of different pigments demonstrates an important point about color, which would become a central issue in Albers's later Variant paintings. Albers asked people what color they felt predominated in these works. He was pleased to get different answers: there was no right or wrong response, for everything depends upon individual perception. What we think we see matters far more than what is actually present. One person sees more black, another more white. The point is that although there are equal quantities of each, the properties of the white or black themselves give the viewer an erroneous perception. Color achieves power, and our eyes deceive us. This was what Albers called "The discrepancy between physical fact and psychic effect,â2 the demonstration of which was an imperative in his art.

At the same time, Bent Black (A) offers the aesthetic delight of crisply interlocking forms, and the excitement of bold angles and rich solid colors. What at first appears neutral and didactic has the pulse and fun of jazz. Forms open up, only to reverse themselves. The viewer moves this way, then that. Art diverts and enlivens us. That the Addison Gallery was so hospitable to such brave, revolutionary conceptsâand prized the art that many did not yet have the courage to recognizeâgave enormous pleasure to its innovative creator.


1. Josef Albers to Charles Sawyer, 19 October 1934, copy in the archives of the Josef and Anni Albers Foundation, Orange, Connecticut.

The Addison was the first American museum to
exhibit the work of Josef Albers. A renowned former
faculty member at the shuttered Bauhaus school in
Dessau, Germany, Albers and his wife Anni fled to
the United States in 1933. On the suggestion of Albersâ
supporter, Edward Warburg of the Museum of Modern
Art, the Addisonâs first curator and director Charles H.
Sawyer enthusiastically agreed to show a selection
of Albersâs woodcuts in 1935 at a time when most
institutions were reluctant to embrace abstraction.
This felicitous connection between Albers and the
Addison resulted in four early exhibitions and many
fortunate acquisitions for the museum.

Learning to Look: the Addison at 90

Your current search criteria is: Exhibition is "Toward Abstraction".