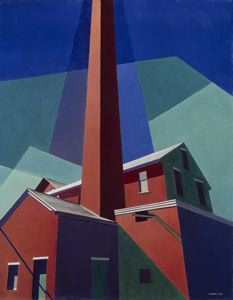 In 1946, Bartlett H. Hayes, Jr., director of the Addison Gallery, invited Charles Sheeler to the museum for a six-week working visit. For Hayes, Sheeler's residency was conceived as the beginning of a unique program for building the Addison's contemporary art collection: rather than purchasing an existing example of the artist's work, Hayes hoped to acquire "a painting stimulated by our particular environment . . . [one with] a direct connection to Andover."1 Sheeler's stay culminated in an exhibition of his paintings and photographs at the Addison and a major acquisition for its permanent collection. Ballardvale remains the Addison's most important painting by Sheeler, but Hayes and subsequent directors continued to admire the artist and acquired several other of his works. Two of these, The Mill and Ballardvale Revisited, relate directly to the 1946 oil and were purchased on the eve of the fiftieth anniversary of Sheeler's residency. Although budgetary constraints prohibited Hayes from carrying on with his innovative plan immediately, it eventually led to the Gallery's artist-in-residence program, inaugurated in the early 1980s. The working visit was also of significant, and lasting, benefit to Sheeler.

Sheeler and his wife, Musya, arrived in Andover in October 1946. Hayes's invitation was timely, for Sheeler had recently completed a three-year appointment as senior research fellow in photography at The Metropolitan Museum of Art, New York, an assignment which sustained him artistically and financially while he struggled to find fresh inspiration for his painting. At the Addison, Sheeler had no responsibilities for lecturing, meeting with students, or conducting classes. Nor did he do any painting, for, as he would explain later, it always took him time to absorb the meaning of a new location. Rather, he spent his time looking and making "notes . . . in shorthand.â2 These "shorthand notes," many of which were made with the camera, became the source for an important series of paintings produced over the next three years, and, ultimately, for a new working method.

In addition to producing a number of straightforward photographs of Phillips Academy buildings during his visit, Sheeler found and photographed a group of abandoned mill buildings in a section of town called Ballardvale, just south of the campus. The most interesting of these proved to be a blocky brick structure with a tall, square chimney.3 As he had done with the old barns of eastern Pennsylvania at the beginning of his career, Sheeler pictured the mill from a number of vantage points, in a manner both carefully descriptive and innovatively abstract. He characterized this mundane building as heroic, both affecting in its isolation and vital in its endurance. In what was probably his first painted study in the series, The Mill, the tone is romantic and vaguely elegiac. Sheeler depicted a corner of the ground floor of the building, cutting off the chimney and stressing the deep shadows and darkened windows. He called such buildings âcarcassesâ;4 here, the intimate vantage point, the small scale of the picture, and the emphasis on the mottled texture of the old brick and on the foliage that has grown up and blocked the doorway suggest the ruin of a dignified structure, now deserted and reclaimed by nature.

In Ballardvale, Sheeler's view of the building is more expansive. The smokestack, rather than the shadowy lower floor of the structure, dominates; it is silhouetted like a church spire against a bright, faceted sky. The textural interest supplied by the bricks and the foliage is eliminated, colors are strong and unmodulated, and although the architectural features of the mill are clearly delineated, all indications of decay are gone and the building is portrayed as a confluence of soaring geometries. While The Mill is a cloistered, huddled, private image, Ballardvale is triumphant.

The Ballardvale buildings remained in Sheeler's mind for many years after he left Andover. In 1947 he produced Architectural Planes (William H. Lane Foundation), emphasizing the essential abstraction of the mill by presenting a section of the faÃ§ade and the base of the smokestack as a series of flat, intensely colored, overlapping geometric shapes. In 1949 he addressed the theme again: Variations in Red (The Toledo Museum of Art, Ohio) is a reprise of Architectural Planes , while the Addison's Ballardvale Revisited (a study for a large oil at The Dayton Art Institute, Ohio) returns both to the intimacy of The Mill and to the idealized purity of Ballardvale. Tiny in scale, taut, elegant, and richly detailed, Ballardvale Revisited gives evidence of a new artistic method that Sheeler devised at about this time: rather than using single photographs to inform compositions that he wanted to develop in tempera or oil, he would combine two or more, experimenting with the intriguing designs resulting from the superimposition of related negatives. This method reached its greatest expression in two works, both of which have roots in Sheeler's Andover experience. In Counterpoint (1949, National Gallery of Art, Washington, D.C.), which stems, like Ballardvale Revisited, from two superimposed photographs of Ballardvale, one printed in reverse, the rich textures of foliage and brick and the fragmented and reconstituted segments of the faÃ§ade are evocatively rendered in shadowy contÃ© crayon. In New England Irrelevancies (1953, Museum of Fine Arts, Boston), perhaps the masterpiece of Sheeler's late years, a reminiscence of Ballardvale is combined with a view of the factories at Manchester, New Hampshire (which Sheeler visited in 1948), and the romantic lyricism that Sheeler had found in these old industrial buildings once again comes to the fore.

3. The building has since been torn down.

Your current search criteria is: Exhibition is "Toward Abstraction".