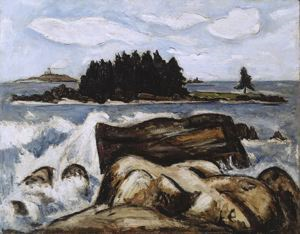 As if in anticipation of his return to his native state of Maine in 1937, Marsden Hartley wrote some five years earlier: âHe who finds will to come home / will surely find old faith / made new again.â1 Hartleyâs relationship to Maine was that of a prodigal son, complicated by childhood memories of poverty and loss. When he finally ventured back after a nomadic life spent wandering from New York to Paris, Berlin, and Provence, among many other places, Hartley claimed that Maine above all had shaped his artistic identity: âMaine is a strong country and so being born there am able to express it in terms of itself with which I am familiar.â2

Part of Hartleyâs latter-day self-fashioning âas the painter from Maineâ was intended to bolster his sagging reputation as an American artist too heavily aligned with European styles of visual expression.3 While he had once argued with vehemence for the cause of modern art and its emphasis on universal values, toward the end of his life Hartleyâs earlier aesthetic position gave way to a more national, if not, indeed, more regional outlook. His previous dismissal of American culture and its tradition of realist paintingâHartley declared in 1921 that âArt in America is like a patent medicine, or a vacuum cleaner. It can hope for no success until ninety million people know what it isâ4âturned in the 1930s into acceptance of the "quality of nativeness â¦ coloured by heritage, birth, and environmentâ that determines all artistic experience.5

Jothamâs Island, painted soon after his return to Maine, was a work Hartley deemed âone of the best pictures I have done.â6 Although the seascape was not altogether a new genre for him Hartleyâs few scenes of the Nova Scotia coast in 1936 mark his first use of the marine as a subjectâhis native Maine served as a catalyst for a more sustained thematic treatment. Here, as in the later Summer, Sea, Window, Red Curtain (the framing of ocean and island by a window and foreground still-life arrangement was a device Hartley had tried in paintings that date from 1934 and 1935), he realized that certain expressive possibilities existed for adding to the formal language of his work. By rendering the landscape and cloud formations in Jothamâs Island as massive, relatively undifferentiated, abstract shapes, Hartley both updated and elaborated on the inventive thrust of his painting.

From 1937 until his death in 1943, Hartley spent approximately nine months of each year in Maine. His renewed connection with what he described as that âstrong, simple, stately and perhaps brutal country,â7 spawned a body of work which critics such as Elizabeth McCausland believe âfreed him from the tyranny of incessantly changing styles.â8 For all the unrest caused by Hartleyâs itinerant lifeâan attribute mirrored in the overall shape and character of his outputâMaine somewhat stabilized the later phase of his career. As Hartley himself affirmed: âIt has been such a joy to come home to my native heath and feel so content here and now I am completely in the thing â¦ these are my big years. â¦ Life not only begins but doubles at 6oâand such an onrush of fresh energy surrounds me.â9