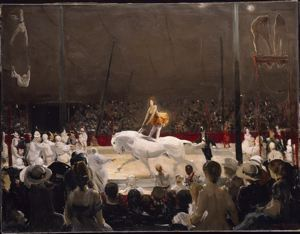 After dropping out of college in 1904, the American painter George Bellows moved to New York to study with Robert Henri and begin his career as an artist. As a member of the Ashcan School, Bellows focused on depicting the daily activities of ordinary people. Bellows became famous for his depictions of boxers, street dwellers, sporting events and rowdy, vivacious crowds.

In his masterful 1912 painting The Circus, Bellows used a brisk, dynamic brushstroke, to create a sense of swirling, excited motion within the circus ring. The fast-paced energy this work exudes suggests that Bellows stood in the crowd to spontaneously capture a passing moment on canvas. However, The Circus was in fact painted from memory in the artistsâ studio, and a second look reveals a grid of pin holes across the canvas. This careful geometric planning underlying the structure of the work suggests that Bellows was influenced by and followed the color and compositional mathematics of the theorist Hardesty Maratta. The balance is focused around the colorful figure of a girl standing on a white horse. She remains grounded in the center of the canvas with the enthusiastic crowd framing her. The viewerâs eye is drawn into a calculated triangle, from the central performer down to the prominent corner figures in the foreground. Finally, the vertical lines of the receding tent poles and the horizontal bands of the crowd create an organizational grid over the canvas, balancing the paintingâs lively activity with a sense of calming control. The year after its completion, this painting was exhibited in the Armory Show of 1913 that introduced European modernism to America.

In the summer of 1912, George Bellows's wife, Emma, helped organize a charity circus in her home town of Montclair, New Jersey. According to Emma, the circus "played to capacity audiences and was a lot of fun but financially a big flopâ¦ I always said George got more out of it than anyone else."1 The benefit circus inspired Bellows to produce two powerful paintingsâOutside the Big Tent and The Circus. While Outside the Big Tent was quickly sold, The Circus remained in the artist's possession and was extensively exhibited before being acquired by a private collector in 1919. Bellows submitted The Circus to the Armory Show in 1913, where it was praised for being "a brilliant bit of drama, full of action and gayety.â2 In that same year the painting won the 1st Honorable Mention at the Carnegie International Exhibition.

Similar in subject matter to his images of boxing and polo matches, the paintings are evidence of Bellows's fascination with human interaction and his passion for the life around him.

I was always very amused with people who talk about lack of subjects for painting. The great difficulty is that you cannot stop to sort them out enough. Wherever you go, they are waiting for you. The men of the docks, the children at the river edge, polo crowds, prize fights, summer evening and romance, village folk, young people, old people, the beautiful, the uglyâ¦ It seems to me that an artist must be a spectator of life; a reverential enthusiastic, emotional spectatorâ¦There are only three things demanded of a painter: to see things, to feel them and to dope them out for the public.3

Bellows's brisk and dynamic brushwork, coupled with his predilection for painting from life, give the impression that his canvases were created spontaneously in the heat of the moment. However, Bellows did not produce either of the Addison's circus pictures on the spot, but rather from memory later in his studio. In fact, most of Bellows's paintings are the result of careful planning rather than impulse. Geometrical structuring was a hallmark of his style and he employed various compositional and color theories at different times throughout his career.4

Shortly before these paintings were made, Robert Henri introduced Bellows to the color and compositional theories of Hardesty G. Maratta, a paint manufacturer and theorist. Marattaâs compositional system involved the equilateral triangle and mathematical proportions found in nature as well as in ancient art and architecture. In employing this system, the artist would develop his composition over Maratta's "web," or grid, of vertical, horizontal, and diagonal lines, which could be shaped into a variety of geometric forms. In aligning his elements of design with points of the web and organizing them accordingly, the artist could achieve an overall harmony and unity in his painting.

The grid of tiny pinholes in the canvases of both The Circus and Outside the Big Tent suggests Bellows's use of Maratta's compositional web.5 The grid on each canvas is composed of rows of holes spaced 41/2 inches apart horizontally and 4 inches vertically. These rows are arranged to create a diamond pattern on which equilateral triangles can be drawn between any three contiguous pinholes. The pinholes penetrating the paint, ground, and canvas appear as tiny bumps on the surface of the painting, signifying that they were made while the paint was wet. Design elements, such as the large triangle of the ferris wheel in Outside the Big Tent and the top of the bareback rider's head in The Circus, coincide with these pinholes. It seems reasonable to suppose that Bellows began by drawing a grid onto his canvas and then inserted pins or tacks at intersecting points of the grid so that the pattern would remain visible as paint began to cover it; but infrared examination reveals no underdrawing to connect the pinholes. Possibly he plotted their location by means of a compass or some sort of template.6

Bellows's use of this compositional system, which seems to be restricted to the paintings created in 1912 and the first half of 1913,7 is particularly successful in The Circus. The slashing brushtroke and blurred figures convey the whirl of motion in the circus ring as well as the excitement of the crowd. Underlying the movement and energy is a strong sense of stability and balance. The entire canvas is bursting with action, yet the focus is clearly on the bareback rider. Framed on either side by the strong verticals of tent poles and acrobats, she is anchored to the center of the canvas by an equilateral triangle which can be drawn from the top of her head down to the shoulders of the two women in the foreground. A carefully considered work of art, The Circus is a masterful blend of exuberant activity and controlled order.

6. According to a 1992 conservation report in the Addison Gallery Archives, Bellows used a compass to create the ferris wheel in Outside the Big Tent.

7. See Quick, p. 41. In addition to the Addisonâs two paintings of 1912, these are: Cliff Dwellers (May 1913, Los Angeles County Museum of Art); Portrait of Dr. T.C. Mendenhall (May 1913, Ohio State University, Columbus); A Day in June (June 1913, The Detroit Institute of Arts); and Approach to the Bridge at Night (June 1913, Chazen Museum of Art (formerly Elvehjem Museum of Art), University of Wisconsin Madison).

Your current search criteria is: Exhibition is "So Long, Farewell".