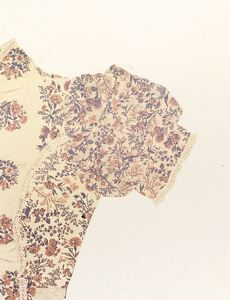 When put together, these six lithographs by Joan Lyons compose an image that is at once sweet and subtly intriguing.

On the one hand, the life-size scale of this piece invites a personal reading, by creating the illusion of peering into oneâs closet and thus allowing for a rather intimate relationship with the object depicted. The delicate floral pattern and slightly faded pastel colors create an atmosphere of innocence and nostalgia for a time past, which turns the act of looking at this work of art into looking at the dress itself and reminiscing about the event at which it was once wornâwhether a prom, as indicated by the title, or another moment of personal importance projected by the viewer.

On the other hand, the title informs the viewer about artworkâs intended associations. For Lyons, this hand-made dress symbolizes the difficulties of balancing the priorities of a mother and an artist, as well as the contrasts between preconceived and evolving notions of artistic expression; at first, the making of the dress delayed artistic output, then the dress itself dictated the imagery of the piece. The very way these two identities influence each other results in a delicate image with a powerful statement about the parallels of motherhood and artistic production: the mother sews together pieces of fabric to make her daughterâs prom dress, while the artist creates a set of images for the viewer to visually âsewâ together.

Active as a visual artist for four decades, Joan Lyons (b. 1937) was the subject of a 2007 retrospective exhibition at the Rochester Contemporary Art Center. Lyonsâs works on paper effortlessly span several mediums, including various photographic processes and printmaking techniques. As the Founding Director of the Visual Studies Workshop Press between 1972 and 2004, Lyons has published over 450 titles, primarily artistsâ books.

Your current search criteria is: Exhibition is "Some Assembly Required".