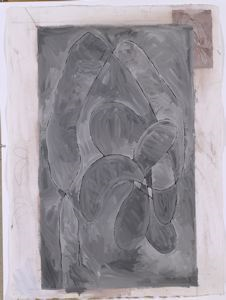 In 1980 the loops and doodles of Carroll Dunham's meandering line that had been seeking to reinstate and reveal the procedures of drawing began also to respond to the more heated desires of the imagination and started to chart the erogenous zones that the organic loops and doodles had formerly been willing only to allude to, with the result that, by 1982, Dunham's seemingly uninterrupted line had become the cartographer of fiery and delirious realms that he referred to as "sexual galaxies," where line's formal articulation of the flatness of the plane was interchangeable with the vagrant sensuality of the imagination. Untitled is one of the group of twelve related drawings that inaugurates this transition.

Dunham's line-driven erotics were slowly arrived at; his risks have always been both daring and methodical. As a beginning artist, he found himself torn in two opposing directions. He was attracted to the more lurid and discredited side of Surrealism, which was still anathema to most forward-thinking artists in the 1970sâspecifically to Roberto Matta, Yves Tanguy, and Salvador Dali, with their fungous forms and acts rendered in retrograde perspective. This attraction was abetted by the Surrealist-inspired graphic psychedelia that was so much a part of the drug culture of the 1960s, in which Dunham came of age. The tuberous forms and northern clarities of Early Netherlandish painters (Dirk Bouts, Hieronymus Bosch, and Pieter Bruegel) lured his eye as well. However, he was also attracted to, and schooled in, the rigorous, self-conscious, formal logic that the Surrealists themselves had railed against, which was so prevalent in the Minimalist and Process art of the mid and late 1960s. In 1970, while still in college, he spent a semester as Dorothea Rockburne's studio assistant; and when he moved to New York in 1972, it was to be in the world of artists such as Brice Marden, Robert Mangold, Robert Ryman, and Barry Le Va. While he admired them, he felt that it was too late to emulate their geometricized, planar architecture. He had to reinvent drawing for himself.

What if Mangold's plane-dependent, linear, geometric figures became more spontaneous? When Dunham finally started making art in 1976, he propelled his drawing into simple gestures on a modulated, monochrome ground (the drawing hand naturally inclines to curves and loops). Dunham was looking back to Surrealist automatism through Cy Twombly and Jackson Pollock. He wanted his line, like Mangold's figures and Marden's and Ryman's monochromatics, to grow out of and become one with the plane rather than be a closed representation imposed upon it. This was largely achieved by scaling his gestures to the size and shape of the surface he worked on and by never permitting the curves to close into a discrete contour. The overlapping curved configurations are subject to multiple exchanges of figure and ground, so that the implications of volumetric form are always pulled back into the flatness of the support.

By 1980, Dunham's hairpin curves and mounds began to acquire more allusivenessâinclining toward the intestinal, the vaginal, and the phallic, while retaining a clarity of process. The days of the month recorded on the Addison's Untitled mark the duration of the making and have, to this day, remained part of Dunham's diaristic, psychosexual formality. Still interacting on a modulated monochrome field, his open-ended linear forming is poised to burst out of its cocoon into Technicolor adulthood.