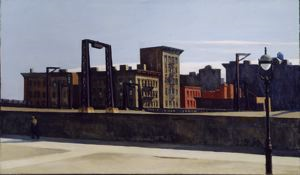 In his powerful and evocative painting, Manhattan Bridge Loop, Edward Hopper has frozen this transportation nexus of bridge, streets, railways, and crowded tenements in lower Manhattan in an eerie stillness and bathed it with cold crystalline light. A solitary figure, trudging along under the shadow of the blank embankment, suggests the human alienation possible within the urban life.

In 1940, when the Addison organized an exhibition called The Architecture of a Painting: Edward Hopperâs Manhattan Bridge Loop, the museumâs director elicited a rare and illuminating statement from Hopper about his artistic intentions. Hopper wrote, âMy aim in painting is always, using nature as the medium, to try to project the subject as it appears when I like it most; when the facts are given unity by my interest and prejudices.â Relying on memory of the scene and armed with âa few small black and white sketches made from the factâ [two of which are exhibited here], Hopper composed the painting. âThe very long horizontal shape of this picture . . . is an effort to give the sensation of great lateral extent. Carrying the main horizontal lines of the design with little interruption to the edges of the picture is to enforce this idea and to make one conscious of the spaces and elements beyond the limits of the scene itself.â

Comparisons between the two preparatory drawings and the final give vivid evidence of the careful ways in which Hopper reordered the elements of the scene to realize his artistic goal.

Study for "Manhattan Bridge Loop" No. 2
1940.72
Portfolio List Click a portfolio name to view all the objects in that portfolio
This object is a member of the following portfolios: