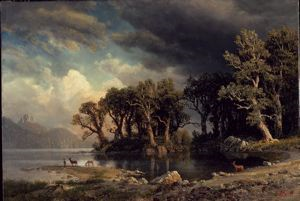 Albert Bierstadt was an irrepressible traveler. Of Prussian birth, he returned to train at DÃ¼sseldorf from mid-1853 to September 1857. Including that extended stay, over his active life he revisited Europe on a dozen occasions, journeyed to the American West a minimum of eleven times, crossed into eastern Canada nine times or more, made his way to western Canada once (also venturing to Alaska) and perhaps twice, and undertook at least five sojourns in the Bahamas. The last of his documented European excursions took place as late as 1900, shortly after his seventieth birthday. Along the way he roamed the East Coast of the United States while sending his paintings to exhibitions throughout the East, South, Midwest, and Far West, as well as escorting numbers of his most important works to or arranging for their appearance at various venues abroad, including the International Expositions of 1867 and 1873 held in Paris and Vienna respectively, the Paris Salon, and the Royal Academies of London and Berlin.

The personal energy manifested by Bierstadt's movements spilled over into his work as a painter. He was, in a phrase, zestfully prolific. A journalist's appreciative remark of 1863 about Frederic Edwin Church, Bierstadt's contemporary and rival, that Church was so productive he seemed to be "painting with both hands,"1 more befitted Bierstadt. By the middle of the sixties Bierstadt often had two or three large works, as well as many medium-size and smaller pictures, under way at once. He kept to near that pace through the 1880s. Aptly coupled with his high studio output were his considerable social skills and his fondness for the limelight. Throughout the late 1850s and the 1860s he adroitly interacted with American and, subsequently, European journalists. During the 1870s and 1880s, when much of the American press and many of his colleagues were critical of him, he continued to seek out sympathetic reviewers, and he seldom if ever spurned those reporters who came to him. He and his works still attracted attention in some sectors of the New York print media as late as the mid-1890s. Hence, for more than three decades the completions and public releases of his paintings were often, so far as he was concerned, matters of timing as much as of creativity.

Yet despite his prolonged propensity for self-documentation and the high interest nowadays in his life and art,2 segments of Bierstadt's chronology and a consequential proportion of his oeuvre remain problematic. By the late 1860s, doubtless in recognition of slipping sales, he began not dating his studio paintings while continuing to sign most images that he touched. The destruction by fire in November 1882 of his country house, Malkasten, in Irvington, New York, doubtless consumed many business records as well as quantities of his sketches and studio works. After his death the surviving contents of his studio were dispersed at auctions and among the relatives of his first and second wives. In consequence, little is now known about his sketching procedures. The freewheeling, repetitious methods that facilitated his studio practice further complicate modern estimates of him.

The Addison Gallery's two small paintings by Bierstadt, both of fine quality, exemplify these historical uncertainties. The generic theme of The Snow Mountainâa sunlit summit surrounded by shadowed ridges, all glimpsed from an elevationâcaptivated the artist, as we know from his enthusiastic response to a Colorado mountain vista that opened suddenly before him in 1863.3 The size, materials, and paint handling of the present piece suggest a transcript taken at a specific site. But where? Given Bierstadt's many crossings of the Alps and the American West, one may ask if the particular view isâor is supposed to beâEuropean or North American. A firm answer proves elusive, however. Recent attempts to identify the scene with the Jungfrau and/or the nearby valley of the Lauterbrunnen, both in Switzerland, and with Bierstadt's large, undated studio canvas now called Mountain Majesty (collection of Jon and Barbara Landau), which, as William Hauptman has shown, is premised on the Lauterbrunnen Valley, raise new questions as they resolve old ones.4 Other small oils by Bierstadt of similar subjects in both the Alps and the Rockies shed little light on this problem.5 To add that The Snow Mountain resembles the taller of the two cloud-borne crests in Bierstadt's Storm in the Rocky Mountains, Mount Rosalie (1866, The Brooklyn Museum, New York), based on sketches made in 1863, is also inferentially to resurrect his verbal analogy of 1859 between the Colorado Rockies and the Bernese Alps.6 For now, the most that can be said of The Snow Mountain is that it probably dates from either the early or late 1860s.

The smaller The Coming Storm is another matter. Handed down through his first wife's heirs and bearing a date as well as a signature, it reads as a studio concoction of modest personal delight. Thematically it descends from a sequence of Bierstadt's studio canvases of the Far West culminating in the vast Among the Sierra Nevada Mountains, California (1868, National Museum of American Art, Washington, D.C.), painted in Rome, and it anticipates several larger Western landscapes by him of the 1870s in which deer are the sole denizens.7 Here, the weight of the composition, shorn of snow-capped peaks and displaying minimal rocky ridges, is carried by the writhing trees and the turbulent clouds. As in his larger, nearly contemporaneous Buffalo Trail: The Impending Storm (1869, Corcoran Gallery of Art, Washington, D.C.) , in which prairie animals also accessorize the aerial drama, the darkening sky is reflected in a patch of water. Unlike that scene, however, here the water surface is becalmed, mirroring the agitation above as though transfixed. Bierstadt was abroad when Martin Johnson Heade unveiled the last of his thunderstorm paintingsâThunderstorm on Narragansett Bay (1868, Amon Carter Museum, Fort Worth, Texas)-at the Brooklyn Art Association in March 1868,8 but he surely knew of Heade's works in this genre.

4. The Bierstadt scholar Vern Pascal (letter of 8 June 1975, Addison Gallery Archives) has proposed that The Snow Mountain depicts the Jungfrau. That Bierstadt knew the Jungfrau is confirmed by his having exhibited a painting of the subject in 1858 in his adoptive home town of New Bedford, Massachusetts; his work entitled Jungfrau at Sunset was sold at H. H. Leeds, New York, on 25 March 1864. William Hauptman (La Suisse sublime vue par les peintres voyageurs, 1770-1914 [Lugano and Geneva: Fondation Thyssen-Bornemisza and Musee d'art et d'histoire, 1991], p. 182) insightfully compares Majesty of the Mountains to a view of Lauterbrunnen by Sanford R. Gifford; the snow peaks visible in the actual scene evidently do not comprise the Jungfrau. But Hauptman's proposed identification of that Bierstadt painting with one shown in New Bedford in 1857 is unlikely, in this writer's opinion. That Majesty of the Mountains, stylistically as well as thematically an embodiment of much of the painter's mature oeuvre, is undated all but removes it from his formative years. More probably Bierstadt returned artistically to a site of his prior Swiss travels after revisiting the country in 1868.