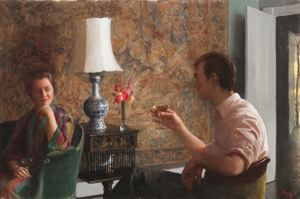 
Medium and Support: oil on canvas
Credit Line: purchased as the gift of Londa Weisman in honor of the 80th birthday of her husband, Sidney R. Knafel (PA 1948)
Accession Number: 2011.38

In the absence of perspectival exactitude, Koch imbues his elegantly staged interior scenes with nuanced psychological subtext. In this work, he captures his sittersâDora, the artistâs wife and a music teacher, and a young man, possibly one of her privately tutored studentsâin a moment of celebration, as indicated by the title. In the vein of his artistic heroes, ranging from Vermeer to Eakins, Koch usually posed his sitters individually, a practice that may explain the psychological disengagement that can be felt between the two, with the young man facing Dora directly and raising his glass in her direction, and Dora gazing enigmatically into the distance, seemingly lost in her own thoughts. At the same time, the informality of the furniture arrangement also signals a familiarity between sitters and domestic environment; despite occupying a small, less central area of the composition, Doraâs position nonetheless demonstrates her purview over her domestic domain.

Your current search criteria is: Exhibition is "Walls and Beams, Rooms and Dreams: Images of Home".