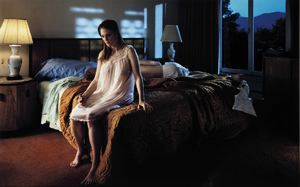 In the photographic series Dream House by Gregory Crewdson, suburbia and surrealism collide. While the moments captured in each of the frames range in character from the mundane to the forlorn, from the bizarre to the tragic, the eerie contrast between subject matter and production valueâhighly designed sets with precise compositions and elaborate artificial lightingâis the common thread running throughout the entire series. Casting a number of Hollywood actors in the roles of nameless suburbanites, Crewdson collaborated with a team of twenty production professionals to convert a vacant ranch house in rural Vermont into an elaborate stage set. By leaving the contents of the house untouched, exactly as arranged by its late owner at the time of her death four years earlier, the artist, who describes this set as âa kind of museum or tomb,â ultimately uses these objects to convey a sense of mundaneâalbeit unsettlingâdomesticity.

Untitled
2014.2.9
Portfolio List Click a portfolio name to view all the objects in that portfolio
This object is a member of the following portfolios:

Your current search criteria is: Exhibition is "Walls and Beams, Rooms and Dreams: Images of Home".