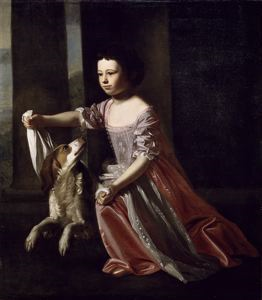 In 1771, the Bostonian artist John Singleton Copley (1738â1815), who had earned a reputation as one of the leading portraitists of the American colonies, traveled to New York to complete commissioned portraits of the cityâs social elite. While there, Copley journeyed to Rock Hall in Lawrence, Long Island to paint the Addisonâs portrait of Mary Elizabeth Martin, the eldest of eight children of Josiah Martin, the Colonel Governor of North Carolina. In this portrait, one of only a handful of paintings of children executed by Copley, the elegantly gowned nine-year-old Mary Elizabeth, framed by classical columns, is frozen in mid-stride as she plays with an English Spaniel dog, the favored pet of English royalty. At the outbreak of the Revolutionary War a few years later, the Martin family returned permanently to England, as did Copley where he devoted himself to stately portraits and history paintings in the English manner.

By the late 1760s, John Singleton Copley's reputation as a portrait painter of extraordinary ability had spread beyond his native New England. Myles Cooper, president of King's College (now
Columbia University), who had traveled to Boston to sit for Copley, urged him to come to New York: "I should be very glad if You could persuade yourself to exercise your Art for a few Months in this place: I am satisfied you would find an unparalleled Degree of encouragement."1 Copley eventually agreed, and in June 1771 he traveled to New York, where he stayed for seven months and produced at least thirty-seven portraits. Of these, the overwhelming majority were of adults: the landowners and merchants who dominated New York's social circles. But Copley did paint at least two children: Daniel Verplanck, the scion of the powerful Verplanck family,2 and Mary Elizabeth Martin, the nine-year-old daughter of Josiah Martin, governor of North Carolina, and his wife, Elizabeth Martin. The Martins were then residing at the home of Elizabeth's father, Rock Hall, in Lawrence, Long Island, where this picture is believed to have been painted.

Mary Elizabeth was the oldest of eight children, and "the Darling of her maternal Grandfather and Grandmother, with whom she has housed from her birth.â3 The special affection with which she was regarded by her grandparents gives credence to the family legend that Mary Elizabeth's portrait was designed to hang on the central panel above the mantel in one of Rock Hall's parlors. That fact, in turn, has been used to explain the unusual dimensions of the portrait, which at 44 3/4 by 39 inches is squarer than Copley's customary 50-by-40-inch canvases. However, several of Copley's other portraits of children deviate slightly from his standard size, and it may be that the composition, more animated than Copley's usual dignified portraits, also demanded a proportionately broader format.

Mary Elizabeth Martin is a reprise of an earlier portrait, Young Lady with a Bird and Dog (Toledo Museum of Art, Ohio), which also shows a young girl in a somewhat awkward kneeling position, attended by a spaniel. In 1767 Copley sent that picture to London for display in the annual exhibition of the Society of Artists. It was not a success: it was faulted for its overbrilliant color and for its excessive attention to peripheral details at the expense of the face and hands of the sitter. Copley attempted to correct these difficulties in Mary Elizabeth Martin, bathing the figure in light so that she stands out from her darkened surroundings and, more important, reducing the wealth of accessories in the earlier pictureâdog, chair, bird, cushion, turkey carpet, column, swag of drapery, and distant landscapeâto achieve a clearer focus on the subject. The little girl romping with her dog unquestionably dominates the composition: there is only the suggestion of a columned portico and the glimpse of a landscape beyond. The "Darling" of her grandparents is portrayed as a child of privilege: her salmon-pink gown with layers of ruffles at the sleeve and lacy figured apron are made of expensive imported fabrics, and her dog, a King Charles spaniel, was the pet of the aristocracy.4

Copley did not, however, resolve all the difficulties of the earlier portrait. Mary Elizabeth's stolid facial expression reveals little of her personality, and her odd kneeling posture distorts her lower body. On the other hand, her interaction with the dog makes the portrait unusually lively. Compared with Copley's earlier representations of children (for example, The Gore Children; c. 1755, Winterthur Museum and Gardens, Delaware) in which the sitters are dressed and comport themselves like miniature adults, Mary Elizabeth is refreshingly childlike. Her elegant gown, with its Watteau pleat of pink silk falling from the shoulder, gives her a floating, pyramidlike shape that suggests motion. Her dog bounds up, its head twisted back to look adoringly at her while she attempts to capture it in a swag of white linenâa playful interchange full of youthful energy and movement. Here, even more than in the portrait of Daniel Verplanck where the young sitter is accompanied by his pet squirrel, the addition of a beloved animal enlivens the composition and deflects some of its formality.

This new, more naturalistic approach to child portraiture had been gaining popularity in England since midcentury in the work of Sir Joshua Reynolds and others; Copley, ever the harbinger of new fashions, was among the first in the colonies to adopt the innovation. This development was not just a change in artistic taste, however, but also a reflection of the more relaxed attitudes to child rearing that had begun to take hold in England and America in the mid-eighteenth century.5 Thus Mary Elizabeth Martin, if not entirely successful as a portrait, is nonetheless something of a stylistic landmark and a barometer of social change.

2. Copley's portraits of Crommelin Verplanck, Daniel, the boy's father, Samuel, and his uncle Gulian are in The Metropolitan Museum of Art, New York.

3. Josiah Martin to Samuel Martin, Jr., Martin Papers, British Museum, London, Add MSS. 41361, 156-57, quoted in Shirley Hibbard et al., Historic Structure Report: Rock Hall (Lawrence, Long Island: Town of Hempstead Museum, 1992), appendix F., p. 3, quoted in Alison A. MacGinnitie, "Mary Elizabeth Martin: A New York Portrait by John Singleton Copley," paper, Addison Gallery Archives, p. 1. The Martins, who were Loyalists, were separated during the Revolutionary War. About 1781, some of the family emigrated to
England, though nineteen-year-old Mary Elizabeth elected to remain on Long Island. She never married, and stayed at Rock Hall through the 1790s; she may then have resettled in England, where two of her sisters were living. She died in London in 1820, at the age of fifty-seven.

4. For a discussion of these dogs as emblems of privilege, see Paul Staiti, "Character and Class," in Carrie Rebora et al., John Singleton Copley in America (New York: The Metropolitan Museum of Art, 1995), pp. 63-64.

John Singleton Copley (1738â1815) was the preeminent portraitist of the American colonial period, and later rose to prominence as a portraitist and history painter during his subsequent career in England. When he was ten, Copley was introduced to Boston's artistic circles by his stepfather, the painterÂ­ engraver Peter Pelham. He studied prints of British paintings and the works of older artists, and by 1753 was active as a professional artist. By 1760, Copley hadbecome the leading portraitist in Boston.

In 1771, Copley traveled to New York at the invitation of Captain Stephen Kemble, who had arranged a number of commissions for him. This portrait depicts Mary Elizabeth Martin (1762â1820), the eldest of eight children of Josiah Martin, the last Colonial Governor of North Carolina, and his wife Elizabeth Martin, first cousins who married in 1761. The Martins were staying at Rock Hall at Lawrence, Long Island, the home of Mrs. Martin's father. In a letter of 14July 1771, Copley tells his half-brother Henry Pelham," . . . we have been to Long Island." In that same letter he writes, "I saw a miniature the other Day of Governor Martin by Miers which cost 30 Guineas and I think it worth the Money." It was during his visit to Long Island that Copley painted this portrait.

Mary Elizabeth led a privileged life, residing primarily at her grandparents's home on Long Island, travelling occasionally to her family's properties in Antigua, and to the Governor's residence in North Carolina. While her young life was characterized by affluence, it was also a time marked by great turmoil in the American colonies. Governor Martin fled from North Carolina back to Long Island at the outbreak of the Revolutionary War, and most of the family returned to England following the War. Mary Elizabeth remained at Rock Hall with her grandmother.

The portrait measures 45 x 40, a size unique in Copley's oeuvre, and family history holds that the portrait was painted to fit a specific overmantel at Rock Hall. This might explain the unusual size; however there is no precedent for this practice, and thus it seems unlikely that the portrait was painted to fit the mantel. It is possible that the canvas was originally 50 x 40, a standard size for Copley, and was cut down at some later date, perhaps to fit the later woodwork. H the upper portion of the painting had not been cut, the girl's head would have been
at almost the center of the canvas. This lower placement was typical of Copley's New York portraits.
Alison MacGinnitie