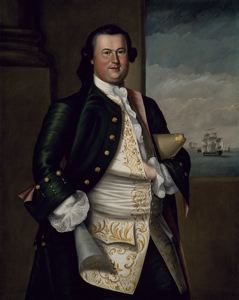 The portrait by John Greenwood owned by the Addison Gallery of American Art poses a number of puzzles, as yet unsolved. The painting was purchased in 1955 through Childs Gallery, Boston; they had purchased it the year before from the London dealers, Appleby Bros. No information about the source of the painting was available. It is not uncommon, however, to discover American portraits in England as many crossed the ocean with Loyalist owners fleeing the Revolution.

The comfortable gentleman depicted by Greenwood is clearly a man of substance, portly and jowled even at his young age. He is dressed in elaboratelyÂ­ embroidered vest under a frock coat with decorative buttons and braid trim; lace cuffs at the wrist and cravat at the neck add embellishment. His pose follows the London fashion as defined in The Rudiments of Genteel Behavior: "The Head erect and turnd will be right, as will the manly Boldness of the Face, temper'd with becoming Modesty . . . .The Arms must fall easy, not close to the Sides, and the Bend of the Elbow, at its due Distance, will permit the right hand to place itself in the Waistcoat easy and genteel . . . the Hat shou'd be plac'd easy under the left Arm . . . ."

The portrait, signed and dated by the artist, is assigned with certainty to Greenwood on the basis of the character of the signature and the stylistic evidence. Greenwood was a skillful painter who developed a successful career in the Boston/Salem area between the retirement of John Smibert and the rise of John Singleton Copley. Alan Burroughs, whose still-authoritative publication, John Greenwood in America 1745â1752, accompanied the exhibition of the same name at the Addison Gallery in 1942, identified approximately fifty works done in the seven years that the artist was in America. This portrait was discovered and purchased after Burrough's publication. It is enticing to ponder the identity of the sitter. His fashionable pose and clothing, the ships in the background-a common reference to the profession of ship owner and/or merchant, and the substantial half-size canvas of 50 x 40 argue that he is a member of a prominent family. Perhaps he is too grand to be a companion portrait to Elizabeth Fulford Welchman [1749, National Gallery] (her husband, Captain William Welchman, a mariner, died at sea in 1775); in size and style he is a better match to Sarah Kilby [c. 1752, Toledo Museum of Art]. Married in 1754 to Nathaniel Cunningham, Jr., Sarah's second husband was Captain Gilbert McAdam, with whom she moved to Scotland at the end of the French and Indian Wars.