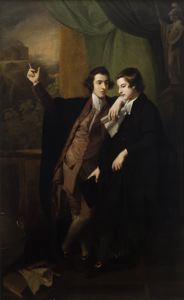 Benjamin West traveled to London in 1763 and settled there, in due course playing an integral part in English cultural life as the second president of the Royal Academy (elected in 1792) and historical painter to King George III. A key to West's rapid success was the support of one of his earliest and most important patrons, Robert Hay Drummond, archbishop of York. It was Drummond, described by George II as âindeed a man to make a friend of,â1 who introduced West to George III. One of three portraits by West depicting the Drummond family, the Addison's painting is as much a reflection of this influential patron as it is of the artist.

West's allegorical portrait of the Drummond brothers reflects his aspirations to go beyond portraiture to the more exalted level of history painting. An eighteenth-century history painter was expected to have read the classics in the original Latin or Greek and to be versed in European literature, history, and philosophy. However, according to West's wife, âhe was so devoted to drawing while a child, and a youth, that every other part of education was neglected.â2 West made up for his scholarly deficiencies by relying on the advice of erudite patrons such as Drummond. The Drummond Brothers is an example of the archbishop's extensive knowledge of history and his belief in the value of examples of ancient virtue for modern imitation. The archbishop was devoted to education and instructed his children himself. According to one of his sons, âhis knowledge of history, ancient and modern, was most accurate, extensive, and profound. It was the favorite of his familiar hours of instruction with his children, [and he deduced from history] the most useful remarks on government, manners, morals and religion.â3

West's biographer, John Galt, tells us that during the course of an evening at the archbishop's residence, Drummond had one of his sons read aloud the account of Germanicus and Agrippina from the Annals of Tacitus. After his son had read the passage, Drummond âcommented on it at some length, in order to convey to Mr. West an idea of the manner in which he was desirous the subject should be treated.â4 The resulting painting, Agrippina Landing at Brundisium with the Ashes of Germanicus (Yale University Art Gallery, New Haven, Connecticut) was exhibited in 1768 together with The Drummond Brothers at the Society of Artists, predecessor to the Royal Academy. In view of the way in which Agrippina was commissioned and the archbishop's concern with his children's education, it is thought that Drummond was also responsible for indicating to West how he wanted his eldest sons to be portrayed.

Dressed in academic gowns, Robert Auriol Hay Drummond (1751-1804) and his brother Thomas (1752-1773) are surrounded by references to education, honor, and virtue. At their feet lie a globe and books. A statue of Athena, goddess of wisdom and learning, watches over them. With his right hand, Robert, the elder, points to a temple on which the words VTRTUTIS and HONORIS, not now visible, were apparently once inscribed.5 These details recall a series of paintings by the Italian painter Pompeo Batoni (1708-1787) of the Choice of Hercules in which Virtue, personified by Minerva, points to the Temple of Honor on a distant hill urging Hercules to choose the difficult path of virtue over vice.6 Such a clearly defined lesson would have been appropriate for the Drummond boys, who in 1767 were fifteen and sixteen years oldâon the verge of manhood.

West's composition places further emphasis on virtue in the scroll in Robert's left hand, on which the name Regulus is inscribed. Marcus Atilius Regulus was a Roman consul and general taken prisoner by the Carthaginians in the first Punic War. His captors promised his release if, upon returning home, he would negotiate peace and the return of Carthaginian prisoners. Back in Rome, Regulus advised the Senate to decline the Carthaginian terms as dishonorable. True to his word, he then returned to Carthage and certain death, despite pleas from his family, friends, and fellow citizens to remain. The story of Regulus's commitment to honor, his own and that of the state, at the expense of his life, would have been familiar to an eighteenth-century audience. In fact, the name Regulus was widely accepted by Londoners of the 1760s as a synonym for personal courage.7 This theme of self-sacrifice and patriotism was so valued and admired in this age of Enlightenment that West repeated the subject in his first painting for George IIIâThe Departure of Regulus (1768, H. M. Queen Elizabeth II).

West's commissions for history paintings continued to increase. By the 1780s he was firmly established as a history painter and virtually abandoned portraiture. The artist's use of allegorical meaning and the moral message in The Drummond Brothers separates this portrait from mere likeness and anticipates the work for which he is best known.

4. John Galt, The Life, Studies, and Works of Benjamin West, Esq., President of the Royal Academy of London, Prior to his Arrival in England, Compiled from Materials Furnished by Himself, vol. 2 (London: T. Cadell and W. Davies, Strand, 1820), p. 12.

6. It is likely that West saw at least two of the Batoni paintings during his stay in Italy between 1760 and 1763, since in 1814 he told Joseph Farington that âwhen I went to Rome, the Italian artists of that day thought of nothing, looked at nothing but the work of Pompeo Batoni.â See Anthony M. Clark, Pompeo Batoni: A Complete Catalogue of his Works with an Introductory Text (Oxford: Phaidon Press, 1985), p. 18.