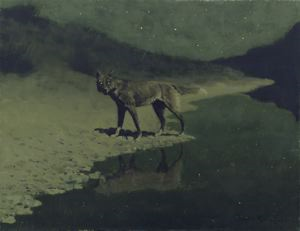 
Medium and Support: Oil on canvas
Credit Line: Gift of the members of the Phillips Academy Board of Trustees on the occasion of the 25th Anniversary of the Addison Gallery
Accession Number: 1956.2

Late in his life Frederic Remington painted Moonlight, Wolf a picture showing a lone wolf stopped at the edge of a body of water. From its position on a rocky shore, the wolf stares at the viewer with gleaming, vicious eyes. What are we to make of this strange image? In one sense, it represents an idea common in Remington's time: the wolf as symbol of an intractably hostile natureâa primitive remnant somehow defying the paths of progress that Remington basically endorsed. In "The Curse of the Wolves," a short piece published in Collier's Weekly in 1898, Remington lamented the havoc wrought by wolves on the cattle industry: "It is quite disheartening to think that such a pest cannot be gotten rid of in this advanced day.â1

Yet the image also suggests Remington's fascination with the wolf's untamed state. The painter adopts a low vantage, only slightly higher than that of the animal, indicating a willingness on the part of this urban artist (Remington lived in and around Manhattan virtually his entire career) to identify with this creature of the wild: to stoop to its level, to become a lower form of life. In the modern age, Remington's wolf was as much an emblem of Theodore Roosevelt's "strenuous life" as Buck, the dog-cum-wolf hero of Jack London's famous novel The Call of the Wild (1903), a copy of which the artist owned. "[Buck] was a killer," wrote London admiringly, "a thing that preyed, living on the things that lived, unaided, alone, by virtue of his own strength and prowess, surviving triumphantly in a hostile environment where only the strong survived.â2 One thinks also of the aptly named Wolf Larsen, the primitive ship captain in another London novel, The Sea-Wolf (1904). Says the narrator, "The dark sun-bronze of his face went black with wrath, his eyes were ablaze. There was no clearness or sanity in themânothing but the terrific rage of a madman. It was the wolf in him that I saw, and a mad wolf at that.â3

Like Wolf Larsen, Remington's wolf is a dying breedâa holdover from an earlier era, defiantly gazing at a modernizing world. In his novel John Ermine of the Yellowstone (1902), Remington describes two primitive menâJohn Ermine and a "half-breed" named Wolf-Voiceâas they pass through the land: "America will never produce their like again. Her wheels will turn and her chimneys smoke ... but she never can make two figures which will bear even a remote resemblance to Wolf-Voice and John Ermine." Later, when Ermine and Wolf-Voice capture a wolf, we are to understand the imprisoned beast as presaging its captors' own doom.4 In Moonlight, Wolf as in many of Remington's late nocturnes, the night suggests the ghostly disappearance of the being we behold. Remington noted approvingly that a friend called another of his late nocturnes, A Scare in the Pack Train (1908, Sid
Richardson Collection of Western Art, Fort Worth, Texas), a "ghost painting.â5 London, among others, strove for the same ethereal nighttime effects: "Night came on, and a full moon rose high over the trees into the sky, lighting the land till it lay bathed in ghostly day.â6

Uncanny in its aspect, the figure of the wolf is also formally related to the surrounding scene. Its eyes match the two most prominent stars in the sky, its body is reflected in the water, the line of its back and head parallels the line of the distant sloping hill, its white-tipped tail assumes the colors and elongated form of the hill and sand, and, finally, its body is arranged in a more or less compact rectangle that echoes the rectangle of the picture itself. As a result, the painting can be said to confront us not simply with a wolf, but also with the wolflike menace of its own presence.7

Why would Remington see the picture as such a threat? For almost his whole career, he placed great and unselfconscious faith in the capacity of his paintings to document the pastâ-as though we were not looking at paintings at all but at the beings, the places, the events they represent. In his late works, howeverâand Moonlight, Wolf is an exampleâRemington became anxious about the capacity, or more precisely the incapacity, of paint to refer to anything but itself. Naturally, this anxiety is conveyed in the surfaces of the late nocturnes, so that what one critic praised as these pictures' "unwonted transparency" reads also as a tenacious opacityâan assertion of the paint as such.8 Less obviously, the anxiety is also conveyed in the subject matter. Look again at the wolf's hostile stare. On one level, its gaze might embody the anxiety of the artist before the painting itselfâit might be understood as providing something like a mirror reflection of Remington's anger and frustration before a work in which he could not help but represent an artifice, a mere paintedness, disastrously at odds with his claims to documentation. More fundamentally, we might say that the wolf's glower suggests its own antipathy, insofar as Remington was able to imagine it, toward the artistic creator who had thus consigned it to the oblivion of a merely painted world.9

2. Jack London, The Call of the Wild (1903; reprint, New York: Vintage Press, 1990), p. 77. Remington's copy of The Call of the Wild is in the Frederic Remington Art Museum in Ogdensburg, New York. Remington also owned a small tabletop bronze, attributed to Antoine-Louis Barye, of a lone wolf; this sculpture, which has certain affinities with the wolf in Moonlight, Wolf, is visible in photographs of the living room of the Ridgefield, Connecticut, house into which Remington moved in March 1909. The photographs and the sculpture itself are in the collection of the Remington Art Museum. For Roosevelt's views, see, for example, his essay, "The Strenuous Life," in Theodore Roosevelt, The Strenuous Lift: Essays and Addresses (New York: Charles Scribner's Sons, 1906), pp. 3-22.

9. For an extended account of this argument, one that relates Moonlight, Wolf to the style and subject of many of Remington's late nocturnes, see Alexander Nemerov, Frederic Remington and Turn-of the-Century America (New Haven, Connecticut: Yale University Press, 1995), pp. 183-224.