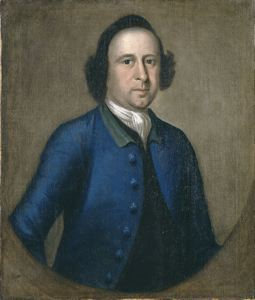 Native-born Joseph Badger (1708â1765) came to artistic maturity in Boston at the time of the retirement of Boston's most prominent painter, John Smibert. Uke many artists of his time, he was forced to supplement his income with other work and at times worked as a house painter, glazer, and decorative painter . Badger did not have the success of his more skillful Boston contemporaries Robert Feke and John Greenwood; he died intestate and penniless in 1765.

Nonetheless, Badger received commissions for a number of important portraits. His work has distinct characteristics, including a rather chalky yet somber palette of browns, greenish-blues, bluish-greens, and blacks. His subjects are stiffly posed with little sense of atmosphere or depth, their heads placed high on the canvas, their eyes often long and narrow with slightly raised corners. His best work has what art historian Louisa Dresser calls an unaffected honesty, being "straightforward, simple provincial painting at its best."

Badger executed a series of portraits of the prominent Salem families. the Pickerings and Ornes. Thomas Orne's detailed account books record payment to "Joseph Badgor of Boston Limbner" for his portrait and that of his wife, Lois Pickering Orne, in 1756, followed in 1757by payment to "Joseph Baggor of Boston Faice painter" for "Pictures of my 4 children." The portraits of Thomas and Lois Orne hung on loan in the Addison Gallery from the 1930s until1973 when their owners sold them at auction. During this time they hung beside Joseph Badger's portrait of Captain Daniel Mackay [sometimes Mackey] which the Addison Gallery had purchased through Macbeth Gallery in 1941. It was a fortunate connection since in 1761 Daniel Mackay had married the Orne's granddaughter, Esther Orne Gardner. Mackay (1720â1796), son of William and Margaret Epes Mackay of Salem, was a shipmaster. According to Salem in the Eighteenth Century, Mackay, in association with his father-in-law, Samuel Gardner, owned a number of local and overseas vessels and himself commanded three schooners. Daniel Mackay died in Andover in 1796. His portrait and that of his wife, now owned by Bayou Bend, Museum of Fine Arts, Houston, passed to descendents, ironically resting with several generations of the Amos Abbott family of Andover before being consigned to Macbeth by Mrs. Abbott Brainerd of Staten Island in the 40s. Another portrait of Mackay, clearly of the same man and also executed by Badger, descended in a different branch of the family; its location and that of the companion portrait of his wife were last recorded in 1897.

Your current search criteria is: Exhibition is "Artistic Highlights of American History".