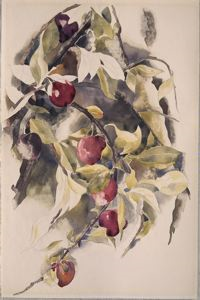 Of the American modernists, Charles Demuth seems to have been among the most eager to retain ties with the artistic establishment. His watercolor technique, while in many ways highly experimental, was often applied to compositions of classical balance and elegant beauty. His daring, controversial subjects were offset by humble still lifes and other conventional themes. He exhibited simultaneously with avant-garde galleries and in the most traditional forums: beginning in the early teens, he sent work almost every year to the watercolor exhibitions of the Pennsylvania Academy of the Fine Arts and the Philadelphia Water Color Club, while trying to make his mark in progressive art circles with annual shows at Charles Daniel's gallery in New York. And in 1926, the year after he contributed half a dozen works to Alfred Stieglitz's landmark "Seven Americans" show, he sent his elegant watercolor Plums to the Philadelphia Sesquicentennial exhibition.

His motivation for trying to maintain a presence in both establishment and avant-garde camps seems to have been emotional rather than economic. He was apparently far less concerned with reaching as many markets as possible with his work than he was with gaining universal approbation; at the same time he viewed at least some of his admirersâand himselfâwith irony. This is revealed by his remarks to Stieglitz about Plums (which was awarded a silver medal at the Sesquicentennial):

I must write and tell you the news,âI don't think it is, as yet, given to the public. The Sesqui Exhibition gave me a silver meddle on my branch of plumbs that water colour you had last winter in my show. It seems funnier to be noticed than not to be.1

The diffident tone of Demuth's statement is paralleled in his watercolors, even the seemingly straightforward fruit and flower still lifes that were his creative mainstay through much of the 1920s. Behind the simple naturalism of Plums is a sophisticated, Cubist-inspired compositional strategy that Demuth had developed in his architectural subjects of the late teens. The watercolor focuses on a vertical slice of space, describing a section of a tree in fruit. The leaves are painted with diaphanous washes that evoke flickering sunlight and the suggestion of a breeze. The plum-laden branches, springy with tension, bend down in a seemingly artless succession of graceful curves, while at the same time overlapping leaves and branches form a pyramid that reaches to the top of the sheet. The baroque voluptuousness of the design is undercut by edges that are softened and richly colored areas that fade into the white paper. Branches and foliage consolidate in the center against a deep, liquid ground, and then dissolve. Leaves that are outlined but left unpainted and branches that trail off into pale washes of color and wispy pencil lines dematerialize the image, even as the rich, juicy plums proclaim its solidity.

Like most of the still lifes Demuth produced during this period, Plums was painted in Lancaster, Pennsylvania, and may represent a tree he saw from his studio on the second floor of his mother's house. Lancaster and the family home were security for him, a place where he could recover and regain his strength after debilitating bouts of diabetes. The critic Henry McBride, who visited Demuth in Lancaster, noted that the artist treasured the "cloistered serenity" of his mother's garden. It enabled him to "confront that 'oblique place,' the modern world.â2 Plums demonstrates Demuth's ability to engage the modern in an image marked by serenity, elegance, and naturalistic ease.

Your current search criteria is: Exhibition is "Living with Design".