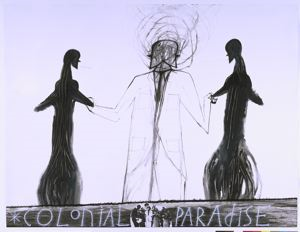 The work of Cuban-born artist Jose Bedia is inspired by an interest in the origins and traditions of ancient cultures and his personal experiences and exchanges with indigenous peoples throughout the world. In 1983 he became an initiate in Palo Monte, a religion developed several hundred years ago by African slaves in Cuba in which beliefs and practices of the Kongo were melded with Catholicism. Two years later, he spent time at the Rosebud Reservation in South Dakota where he was apprenticed to a Lakota shaman with whom he discussed the parallels between Palo Monte and Native American beliefs. The collision between culturesâancient and modern, indigenous and imperialist, native and immigrantâand their effect upon each other is one of the primary themes in Bediaâs art.

Colonial Paradise is part of a series of drawings that combines photocopies of nineteenth-century ethnological photographs of the Kongo and Native Americans with Bediaâs own hand-rendered versions of the same image. While the photographs present typically ethnographic and stereotypical views of indigenous rituals, villages, and people, Bediaâs drawn interpretations of these photographs tell a very different story. Bediaâs aim is not to deny the information communicated in the photo, but to reveal additional layers of meaning in order to encourage a deeper understanding of the subject or event depicted. Here, Bediaâs re-rendering of an image of colonizers posing with ânativesâ looms large over its source image. Raw and forceful, the artistâs silhouetted figures suggest a shift in power. Transparent and unsettled as the agitated lines that emanate from his head suggest, the Western anthropologist stands in strong contrast to the bold and silhouetted African figures that, while still in the territorial clutch of their colonizer, appear serene and solidly rooted.

Exhibition List
This object was included in the following exhibitions:
Related Siblings(s) Click a record to view
Portfolio List Click a portfolio name to view all the objects in that portfolio
This object is a member of the following portfolios:

Your current search criteria is: Portfolio is "Themes: MLC Portfolio: The Immigrant Experience".