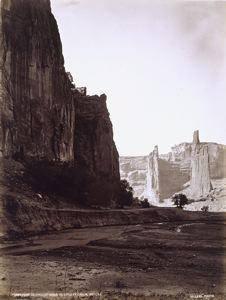 After the Civil War, attention reverted to the West and the settlement of the vast new territories acquired before the conflict. Working for government agencies, private industries, and the tourist trade, photographers participated in this expansion campaign, recording geological, ethnographic, natural, and man-made wonders. Their images served as powerful tools of persuasion in attracting settlers, investors, and visitors.
John Hillersâs photograph of Canyon De Chelley, Arizona, was made during an expedition sponsored by either the Bureau of Ethnology or the U.S. Geological Survey, both of which were under the direction of ethnologist and geologist John Wesley Powell. Hillers photographs were intended to support Powellâs efforts to understand the scientific implications of this arid site.

It is tempting to view nineteenth-century photographs of the American West, with their pictorial breadth and precise detail, as magnificent portraits of the new territories. These images, however, originally functioned in quite a different manner, for photographers such as Eadweard Muybridge, Timothy H. OâSullivan, John K. Hillers, William Henry Jackson, and F. Jay Haynes all created images that were ultimately meant to be used rather than simply admired. Whether intended for commercial sale, topographic survey, industrial promotion, or some combination of these, each photograph served a practical purpose. In so doing, these images portray more than a regionâthey document a way of seeing, knowing, and understanding the terra incognita of the West.

At first glance, the breathtaking photographs of Yosemite, California, taken by Eadweard Muybridge, seem anything but utilitarian. Though they received popular acclaim for their âartistic excellence,â Muybridge relied on their commercial appeal to both actual and armchair tourists eager to purchase views of Yosemite.1 Cottonwood Bend, Valley of the Yosemite presents a contemplative, silent scene, typical of the style of his rival Carleton Watkins. Here, nature is contained and framed: the still water presents a crystalline reflection of the dramatic rock face on the right, while the cottonwood trees bend in on the left to create a perfectly enclosed image. The only open space is a bit of sky, and its reflection, in the center. The fabled âwide openâ spaces of the West have been contained and packaged, as it were, for public consumption.

Government-sponsored survey photographers such as Timothy H. O'Sullivan and John K. (Jack) Hillers applied a similar aesthetic strategy of containment in their photographs of the potentially overpowering views of the Southwest. This was true whether the photograph served such pragmatic interests as agriculture, transportation, and settlement, as in the Wheeler surveys (O'Sullivan), or the scientific interests of geology, botany, and ethnology, as in the Powell surveys (Hillers).2 O'Sullivanâs Alpine Lake, Cerro Blanco Mountains, Colorado, taken under the aegis of Lieutenant George M. Wheelerâs 100th Meridian survey, presents a land offering itself up to human habitation and use. This view is confirmed by the presence at the lower right of two men fishing. The inclusion of these figures, although diminuitive in scale, demonstrates the areaâs potential as a sustainable and hospitable site. In addition to being beautiful, OâSullivanâs images promote Wheelerâs mandate to focus on the economic opportunities of these newly opened-up lands.

Jack Hillers photographed such sites as East Fork De Chelley River, De Chelley Canon, Arizona as part of John Wesley Powellâs effort to understand the scientific implications of this arid site. Though a potentially hostile landscape whose only source of life, the river, has completely dried up, this area appears ultimately knowable. The foreground view of the riverbed presents a likely area of study, while the enormous geological formations in the distance suggest further areas for research. These formations, though daunting, promise to reveal their secrets through a similar technique of close observation that will utilize both the scientific expertise of Powell and the mechanical exactitude of the camera.

The true economic future of the West lay in industry. Photographs that depicted industry's capacity to transform the wilderness into useful, profitable land were eagerly commissioned and viewed by potential investors. One of William Henry Jacksonâs earliest photographs, In Granite Canon, depicts part of the recently completed Union Pacific rail line as it snakes through Granite Canyon, Wyoming. Here the composition suggests openness rather than containment. As the track cuts through the rocky terrain, the eye follows its curve past a distant boulder, suggesting the march of progress beyond the picture frame. Though Jackson was not an official railway photographer, his photograph nonetheless provides a very positive image of this stretch of the Union Pacific and a beneficent view of the railroad in the land.3

Industrial progress is also the subject of F. Jay Haynesâs Gloster Mill , where nature is subservient to the mill operations. Order is everywhere in evidence, from the strict symmetricality of the composition to the bundles of neatly chopped wood in the foreground. The caption, â672. GLOSTER MILL, 60 STAMPS, 24 PANS, 12 SETTLERS.â is a further declaration of the mill's success: a Go-stamp mill had a daily capacity of 250 tons of gold or ore.4 This scene also indirectly advertises another sign of technological progress: the railroad. Haynes served as the official photographer for the Northern Pacific Railroad Company, and this shot was most likely taken from a stop along their route, thereby calling attention to the potential wealth of the region. In the words of one of his superiors, âthere is not a view that he sends out â¦ that does not advertise the N.P.â5

Through careful framing and composition, these photographers helped transform the âWild Westâ into something considerably more tame and approachable. In this way, they served as both participants and the shapers of the countryâs growing Western expansion, with all the economic opportunities that came with it.


1. Muybridge's Yosemite views were highly successful both financially and artistically. Advance notice of the series brought over a hundred subscribers, including the San Francisco Art Association and the Central and Pacific Railroads. The proceeds from these subscriptions, as well as subsequent sales nationally and internationally, netted Muybridge âwell over twenty thousand dollars.â See Mary V. Jessup Hood and Robert Bartlett Haas, âEadweard Muybridgeâs Yosemite Valley Photographs, 1867-1872,â California Historical Society Quarterly 42 (1963), pp. 5-26. Many newspapers and periodicals proclaimed the âartistic excellenceâ of the series; one such was the Daily Morning Call (17 February 1868), quoted in Gordon Hendrick, Eadweard Muybridge: The Father of the Motion Picture (New York: Grossman Publishers, 1975), p. 18.

2. OâSullivan served as the official photographer for Lieutenant George Montague Wheelerâs Geographical Surveys of the Territories of the United States West of the 100th Meridian in 1871, 1873, and 1874. The Hillers photograph is from an expedition sponsored by either the Bureau of Ethnology or the U.S. Geological Survey, both under Powellâs directorship by 1881. For more information on these and other government surveys, the best source is William H. Goetzmann, Exploration and Empire: The Explorer and the Scientist in the Winning of the American West (New York: W. W. Norton & Co., 1966).

3. This was the first instance of the mutually beneficial relationship Jackson would have with railroad companies throughout his career. In 1869 Jackson elected to take photographs along the route of the newly completed Union Pacific line. He felt that this would enable him to secure good âscenicâ views to sell. The Union Pacific, no doubt aware of the photographsâ public-relations value, provided Jackson with free passes in exchange for some of the photographs. See William Henry Jackson, Time Exposure (New York: Van Rees Press, 1940; reprint, Albuquerque: University of New Mexico Press. 1986), pp. 176-85; and Peter Bacon Hales, William Henry Jackson and the Transformation of the American Landscape (Philadelphia: Temple University Press, 1988), pp. 40-60. The icon of the railroad, or train, in the landscape was a powerful manifestation of the desire to merge the interests of nature and industry seamlessly in the name of âprogress.â For an extended treatment of this theme, see Susan Danly and Leo Marx, eds., The Railroad in American Art: Representations of Technological Change (Cambridge, Massachusetts: MIT Press, 1988).