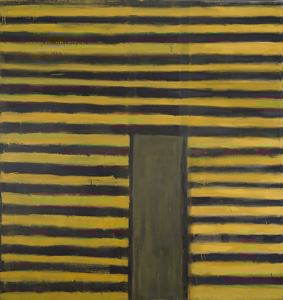 Few artists have affected the course and the character of painting in the second half of this century as decisively and consistently as Frank Stella. In December 1959, when still only twenty-three, he showed four of his famous Black paintings, consisting solely of bands in linear patterns, at The Museum of Modern Art. The unyielding literalness of these pictures (recapitulated in the 1967 prints of the series also in the Addison's collection) shocked many observers as a seeming abnegation of the very practice of painting. But they clearly announced a seismic shift in the history of art. Stella has since come full circle, working first in the more open and colorful style of the 1966 Irregular Polygon Tuftenburo IV, a gift of the artist to the Addison, and then in an ever more flamboyant and baroque direction which has recently included monumental architectural constructions of unending complexity. For over thirty-five years, Stella has offered one surprise after another that has always pointed to new directions and new possibilities.

In 1959 the Black pictures appeared to some as if born overnight, but they were rooted in Stella's earlier paintings, and in turn in his training and acute understanding of current and past art. Stella was born in 1936 in Malden, Massachusetts, and in 1950 entered Phillips Academy at Andover. Here he began to paint seriously under the guidance of the now-legendary artist teachers Patrick Morgan and Gordon (Diz) Bensley. Their teaching, conducted in concert with the excellent and up-to-date history of American painting available in the Addison's galleries, gave Stella a grounding that stands behind his entire body of work. From the start Stella's focus was on abstract art, a focus he maintained at Princeton University, where he studied art history and painting with William Seitz and Stephen Greene, also gifted artist teachers.

At Princeton, Stella was taken by the power, openness, and directness of Abstract Expressionism, then at the peak of its prestige in New York, and he painted in a manner inspired by Willem de Kooning, Franz Kline, and Helen Frankenthaler. By his senior year in 1958, however, Stella had begun to question the rhetoric and the excessive brushwork and paint handling of Abstract Expressionism. In January 1958 he was deeply impressed by Jasper Johns's first New York exhibition. He was especially struck by the idea of repetition inherent in the stripes of Johns's Flag paintings, the way they "stuck to the motif," and by their rhythm and intervals, elements that offered a corrective to the composing and drawing inherent in Abstract Expressionism.

Stella began to experiment with these ideas in his last months at Princeton and then focused intensively on them after graduating in June 1958 and moving to New York, where he devoted himself full time to painting. That summer, while visiting Bensley in Andover, he did studies that were the basis for a series of large-scale paintings, including East Broadway. This is based on an allover patterning of uneven horizontal bands of alternating yellow and black, with a rectangular box shape set at the lower center. The stripe pattern is clearly indebted to Johns's Flags, but it also relates to certain paintings by Al Leslie, as well as Richard Diebenkorn, an artist Stella made reference to in a drawing for a lecture at the Pratt Institute in New York City in January 1960.1 The vertical box shape recalls the floating rectangles of Mark Rothko, whom Stella admired.

East Broadway and its companion works of 1958, however, retained the painterly look and feel, as well as the scale and directness, of Abstract Expressionism, while seeking to clarify it, to make it more concrete. Certainly, Stella belongs to this tradition rather than to that of geometric painting. In pictures such as East Broadway Stella was among the first of his generation to seekâand to findânew order, a new stability, an even more pronounced simplicity and immediacy of a directly given experience. They are the harbingers of the Black and Aluminum pictures of 1959â60 that heralded the arrival of a new generation in American art.2

While East Broadway is in one sense a transitional painting, a stepping-stone to the more regular and systematic symmetry of the Black paintings of 1959, it is important and compelling in its own right. As with Rothko's multiform paintings of 1948, we are witness to a rare moment when we can literally feel a young and determined artist wrestling with his medium and forcing it, before our eyes, into a new kind of language. The painting has the feel of a landscape, albeit an urban landscape, alluded to by the vertical rectangle which suggests a door. The intensity and insistence of the bands seem to embody the freedom and excitement that Stella, now on his own, away from the confinements of college, felt in the ambiance of New York. He lived first on Eldridge Street, near East Broadway, a "tough neighborhood," before moving that fall to West Broadway. In his notes for the 1960 Pratt lecture, Stella made reference to the yellow and black in East Broadway as the "psycho-color" of the city.3 These colors have the gritty, grimy feel of urban blight, of filtered sunlight pulsing over aging New York buildings, while the insistence of the bands underlines the unrelenting pace of city life. This same combination of yellow and black was later transformed, reappearing as brilliant, high-keyed hues in paintings of an altogether different mood, the Moroccan series of 1964â65.

Stella seems to have forced the bands into existence across the surface through an act of will, with only his intuition to guide him toward an as yet imperfectly perceived path. The hand is evident in the still brushed and reworked surfaces, the uneven spacing, the varying width and placement of the bands, their downward tilt to the right, and the (apparently) forgotten band at the lower right, which results in an uneven number of bands in that area. It is a rich and alive surface, forming the palpable substance of a painting that summarizes the immediate past while looking to the future. For it was in paintings such as East Broadway done in the summer of 1958 that Stella first realized his ambition to make a completely independent abstract art that severed all roots in representation, an ambition that has marked his art to the present day.

2. The Addison also owns works by others who helped usher in this new direction, artists such as Hollis Frampton, Jasper Johns, Ellsworth Kelly, and Kenneth Noland, all works given generously by Frank Stella himself.