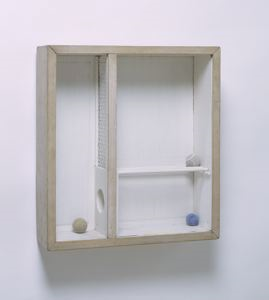 Self-taught as an artist, Joseph Cornell made his first small constructions and collages in 1931. Over the next four decades, he developed a subtle visual poetry, based as much on commonplace objects and sights as on broadly uplifting themes. The natural and urban environments were equally important sources for connections that Cornell sensed between emotions, ideas, and objects. This certainly applied to his interest in the aviary, which inspired numerous box constructions such as Cage, particularly during the 1940s, as well as a thematic exhibition in 1949 and his short film, Aviary, of about 1955.

Like his maternal great-grandfather, who had maintained a splendid aviary, Cornell was an inveterate bird-watcher. No bird was too small or too common to delight him, whether glimpsed at his backyard feeder in Flushing, New York, in rural New England and Long Island, or on New York's streets. He also extended his "bird-watching" to man-made sites as variations on the notion of habitat. Display cases at New York's Museum of Natural History, John James Audubon's prints, references to birds in literature and the performing arts, and bird-shaped iron targets in shooting galleries are among the sources that enhanced Cornell's appreciation for the natural beauty, activities, and symbolism of birds.

No habitat, however, had greater impact than a pet shop that Cornell encountered in New York during the late 1930s.1 Glimpsed from the street, the store's white walls and array of caged tropical birds conveyed a sense of light, color, and motion that dazzled him. By the mid-1940s Cornell had translated his impressions into a growing number of boxes, and his notes at that time sketch his goals:

inner chamber of arranged mirrors for accentuated effect of
depth

In these notes the cage emerges as the organizing motif for Cornell's Aviary boxes. The '''lived in' mussy aspect" dominated the earliest examples, which featured chromolithographic cutouts of parrots, cockatoos, or parakeets mounted in heavily painted white interiors. An abundance of details, such as drawers, springs, twigs, angled mirror fragments, and expressionistic trails of paint, heightened the impression of a captive bird's activities. As often happened when Cornell worked through his ideas in multiple examples, he soon began to build less literal, more streamlined versions such as Cage, the embodiment of the "clean & abstract" direction he had also identified for the series.

Larger and squarer than many of his other boxes, Cage demonstrates Cornell's ability to arrange volume, line, and color as much in the manner of a painter as a sculptor. The dynamic of three unequal compartments, the effects of colored balls against textured white surfaces, and the variations on line and circle contribute to this impression. The work also conveys a strong sense of architecture reminiscent of the whitewashed, weathered buildings that Cornell had encountered during youthful travels throughout New England. Although Cage appears unoccupied at first glance, it hosts three small birds, formally and metaphorically reduced to their essentials in the form of mobile balls. Simultaneously witty and austere, this box resonates with Cornell's belief in the beauty of the commonplace found even in the midst of urban grit and impersonality.

Late in 1949 the cage motif reached its fullest expression in the installation of "Aviary by Joseph Cornell" at the Egan Gallery in New York. The gallery's pristine white surfaces, painted and segmented to the artist's specifications, set off twenty-six boxes arranged like cages on the walls and shelves of a pet shop. Included were two works entitled Cage, one of which was the example later acquired by the Addison, and four others with related titles: Compartment Cage, Abandoned Cage, Lattice Cage, and Porthole Cage.

Cornell acknowledged his pet-shop encounter as an experience that had changed his life and, by inference, his way of seeing.3 Reviewing the "Aviary" exhibition, Thomas B. Hess applauded the new works' "strict honesty, a concentration on texture and ordering of space," which, in his estimation, far surpassed the Victorian fussiness and dense theatricality of the artist's earlier constructions.4 Neither the artist nor the critic was incorrect in thinking that the Aviary theme represented a turning point, as series after series of new boxesâwith titles such as Dovecote, Hotel, Celestial Aviary, Observatory, Winter Night Skiesâappeared throughout the 1950s as inheritors of the "white magic" that Cornell had come to cherish.

2. Cornell Papers, microfilm reel 1067, frame 272, undated notes in "Aviary" file probably written after 1943, when Cornell began working on the series in earnest. This page-length quotation from Cornell's notes reflects his spacing and use of underlining. Deletions made by Cornell himself in the course of writing have not been incorporated.