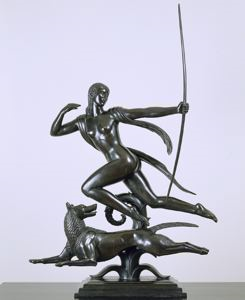 Paul Manship was one of Americanâs most prominent early twentieth-century sculptors. The Minnesota-born Manship won the coveted Prix de Rome at the American Academy in Rome in 1909 which led to three years of European study of archaic and classical sculpture. By his return to the United States his work was garnering attention for its careful navigation between abstraction and representation. Manshipâs first show in New York at the end of 1912 sold out, and from then on his sculpture was in demand. With its polished surfaces, undulated forms, and controlled linear ornamentation, his work was the manifestation of what came to be known as Art Deco.

The Addison Gallery has held Paul Manshipâs work in high regard from its earliest days. The young artist was a close friend and associate of Charles A. Platt, the architect of the museum. In 1928, the committee assembling the collection for the anticipated museum had purchased Manshipâs, Flight of Night. When Platt was designing the Addison in 1930, he engaged Manship to create the fountain, Venus Anadyomene, to take place of pride in the museumâs central rotunda. That year the Art Committee also added three bronze sculptures, including the iconic pair of Diana and Actaeon. Later gifts of a larger version of Flight of Night and a number of bronze medallions bring the total number of Manship works in the collection to ten. In addition, Manshipâs Armillary Sphere adorns the south side of the Great Lawn of Phillips Academyâs Charles Platt-designed campus.