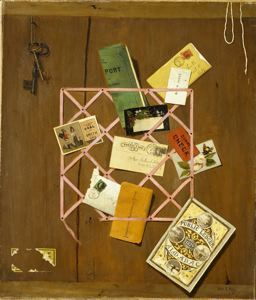 This is the earliest recorded work by John Frederick Peto that belongs to a type of still life commonly known as a ârack picture." Examples have been traced back to seventeenth-century Holland and Flanders, one of the earliest being Wallerant Vaillantâs Letter Rack of 1658 (Staatliche Kunstsammlungen, Dresden). Peto, who preferred the term âoffice board,â has been recognized as the American master of the genre, and he executed more examples of it than did any other American artist.1

Peto painted rack pictures during two distinct phases of his career.2 The first occurred during the years 1879-85, the period to which the Addisonâs example belongs; the second ran from 1894 to 1907. In the earlier period, he created rack pictures which, like the Addisonâs, make specific references to places of business. Compositionally, they tend to be more crowded and complicated than those of the later period, and, more often than not, they include objects apparently unrelated to each otherâphotographs, almanacs, keys, and pieces of string, for instance. A larger number of tapes are shown in the earlier paintings; the Addisonâs still life has ten tapes set within a frame of four more, which is about as many as Peto ever used. There are fewer tapes in the later pictures, often only two forming a simple âXâ within a frame of four others.

In Office Board for Smith Brothers Coal Company, the tapes hold an almanac dated 1879, a âdinner check,â a greeting card with a floral border, an annual report for some unidentifiable business, two letters (on one envelope, the name Smith can be made out), a postcard addressed to the artist, the illustrated business card of the Smith Brothers Coal Company from which the painting takes its title, a calling card from one âDr. H. Jones,â a postcard depicting flowers and a hovering bee, and an envelope with the cryptic phrase: IMPORTANT INFORMATION INSIDE. A number of these elements appear in other rack pictures by Peto. For example, the greeting card is seen in Rack Picture with Telegraph, Letter, and Postcards (1880, New York art market, 1983) and in Office Board for Christian Faser (1880, collection of Jo Ann and Julian Ganz, Jr., Los Angeles), which also uses the envelope inscribed IMPORTANT INFORMATION INSIDE.3 Even the card for the Smith Brothers Coal Company reappears in the latter painting, but with the name Benson replacing that of Smith.

The recurrence of certain objects in different rack picturesâand especially the fact that the name on the Smithsâ business card here could be so readily changed to Benson in Office Board for Christian Faserâsuggests that these still lifes were not necessarily commissioned by the individuals or companies who happen to be referred to in them, and that the objects depicted did not necessarily have any particular or specific meaning for patrons. That is, there is no evidence that a company owned by brothers named Smith commissioned or ever owned the Addison's painting; in fact, attempts to identify the company have been unsuccessful, and it seems likely that it was a product of Petoâs imagination. It seems equally likely that most or all of the objects depicted in this and similar paintings were actually owned by Peto, not by his patrons.4 To be sure, Peto may have included certain items in order to encourage potential patrons to buy a picture; but, again, there is no evidence that such a lure, if indeed it existed, had the desired effect.5

Although Peto is now among the best-known American still-life painters of the nineteenth century, his fame was limited during his own lifetime. In fact, his reputation has since suffered by comparison with that of his better-appreciated contemporary William Michael Harnett, who was generally thought to have influenced Peto in almost everything that Peto did. The scholarship of art historians Alfred Frankenstein and, more recently, John Wilmerding has done much to clear up the confusion surrounding the two artists, and it has even been suggested that, while Harnett certainly influenced Peto, Peto may have had some influence on Harnett, too.6 In fact, it is Petoâs Office Board for Smith Brothers Coal Company which specifically suggests that this may have been the case. Surely it cannot be coincidental that both Peto and Harnett created their first rack pictures in the same year, 1879. An envelope in Harnettâs painting (The Artistâs Letter Rack, The Metropolitan Museum of Art, New York) is dated 26 August 1879, and most scholars have assumed this to mean that Harnett actually painted the image in that month and year. If soâand this dating of the painting has recently been questioned7âthen Petoâs Office Board for Smith Brothers Coal Company, which is dated June 1879, was painted first, indicating that it was Peto who inspired Harnett to take up the genre of rack pictures instead of the other way around.


1. Alfred Frankenstein, âHarnett, Peto, Haberle,â Artforum 4 (October 1965), p. 31. Peto probably painted dozens of rack pictures, while the other major American still-life painter of the day, William Michael Harnett, painted only two. It is also interesting to note that when Peto painted a full-length portrait of himself in 1904 (Crystal Bridges Museum of American Art; illustrated in John Wilmerding, Important Information Inside: The Art of John F. Peto and the Idea of Still-Life Painting in Nineteenth-Century America [Washington, D.C.: National Gallery of Art, 1983], p. 229), he depicted himself working on a large rack picture which dominates the background and which can be identified as his A Closet Door (1904-06, Amon Carter Museum of American Art).

5. These points are discussed in Doreen Bolgerâs article, "The Early Rack Paintings of John F. Peto: 'Beneath the Nose of the Whole World,'" to be published in the Princeton University Press book, The Object as Subject: Essays on the Interpretation of Still Life, ed. Ann W. Lowenthal. Bolger also suggests that Peto may have altered already finished pictures in order to suit clientsâ needs or tastes and in order to include direct references to them. She posits that Office Board for Smith Brothers Coal Company was simply a demonstration piece, executed to make clients aware of the artist's talents. The use of the name Smith was possibly a stand-in, then, for whatever name a client might wish to have inserted in its place. I wish to thank Doreen Bolger for sharing a manuscript version of this article prior to its publication.

6. See especially Frankenstein, After the Hunt; and Wilmerding.