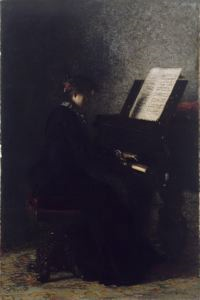 Elizabeth at the Piano

Throughout his career Thomas Eakins was engaged by the challenge of describing in pictorial terms the superior creative and intellectual abilities of selected men and women.1 In this portrait, Eakins treated the paired themes of performance and musicianship. His subject was Elizabeth Crowell (1858-1929), a skillful pianist. She was the sister of Eakins's boyhood friend William Crowell, who married Eakins's sister Frances in 1872, and of Katherine Crowell, to whom Eakins himself was engaged before her premature death in 1879.2

Elizabeth at the Piano is the largest in a series of four paintings of women playing the piano produced by Eakins in the early 1870s; these in turn are part of a group of canvases most of which feature female family members or close friends posed in the gaslit interiors of the Eakins family's Mount Vernon Street house.3 Two of these paintings, Elizabeth at the Piano and Chess Players, an all male scene featuring his father and two friends (The Metropolitan Museum of Art, New York), were among the five pictures that Eakins sent to the Art Department of the Centennial Exhibition in Philadelphia; there is no record that he exhibited the others.4

With masterful control of dramatic chiaroscuro, Eakins portrayed Elizabeth Crowell sitting at a grand piano set on a decorative Oriental carpet. Eakins used a limited palette of cool blues and browns; a red rose in Elizabeth's hair provides a spot of color. A beam of light emanates from the upper left, outside the picture, to highlight the sitter's head and hands, the sheet music, and a patch of wall beyond. A rich impasto of color, applied with a palette knife, enlivens the canvas surface with textural contrasts. The result is a powerful evocation of the "spiritual and physical union requisite to music making.â5

In his use of dramatic tonal contrasts and gestural paint application Eakins emulated the paintings of LÃ©on Bonnat, with whom he had studied for a short time in 1869 while still in Paris. By the late 1860s Bonnat had begun to make his name as a popular society portraitist, best known for combining painstaking exactitude with a lush painting technique, troweling color onto canvases to create vibrant surface patterns and textures around the calculated poses of his sitters; some critics said his portraits seemed created from strokes of plaster and sand.6

In contrast to Bonnat's more prosaic compositions, however, Eakins endowed his subject with a spiritual dimension. Light reflected from the sheet music touches the sitter's face, outlining her profile "to reveal an expression of serenity, confidence and concentration.â7 Though the light comes from outside the canvas, it is caught and controlled by pianist, instrument, and music as if emanating from within the figure; the play of light and shadow becomes the pictorial sign of her concentration and talent. As Michael Fried has noted, Thomas Eakins produced two kinds of images during the early 1870s: scenes of rowing and boating that represent men engaged in vigorous activity in the outdoors, "brightly and for the most part evenly illuminated [and] executed with scrupulous attention to minute detail," and interior scenes usually featuring young women, "engaged in simple actions that assume a dignity by virtue of having been represented as manifestly and intensely absorptive." It seems that Eakins was pursuing two contrasting artistic paths, the active and masculine versus the contemplative and feminine. But as Fried goes on to point out, the "absorptive" quality of the domestic interiors in fact are a complement, not a counterpoint, to the equally reflective self-involvement of Eakins's athletes.8

Many writers have characterized Eakins's relentless genius for revealing the inner character of his sitters as informed by a Calvinist "Yankee" sensibility.9 This misrepresents not only the evidence of the artist's own compositions, but also the character of the place in which his life was mainly spent. Eakins came from Quaker stock, and he lived in this country's quintessential Quaker community. Far from being Calvinist in outlook, his portraiture was informed by what William Innes Homer has called the "secular Quakerism" of his generation. Homer notes the influence of Quaker values in Eakins's dislike of pretension and his lifelong admiration of individual achievement derived from thought as much as action: "Shown almost always in plain simple settings his sitters think, meditate, reflect ... the sitter may belong to the aristocracy of achievement but is given none of the trappings of social aristocracy."10 Indeed, we can trace throughout Eakins's portraits, from the start of his career, the consistent use of chiaroscuro not just to model forms but also to describe pictorially the mental processes of his sitters. The accomplished men and women whom Eakins deliberately selected as subjects experience the "inner light" of talent and inspiration.


1. "[He] sought the person who in his full intellectual, aesthetic, and athletic power was definitive of the best of his times"; Elizabeth Johns, Thomas Eakins: The Heroism of Modern Life (Princeton, New Jersey: Princeton University Press, 1983), p. 3.

4. The other three paintings were: Portrait: Dr. Rand, Base-Ball, and Whistling for Plover. A sixth painting, the Portrait of Dr. Gross, was displayed in the U.S. Army Post Hospital exhibition. See Goodrich, p. 130.

8. Michael Fried, "Realism, Writing, and Disfiguration in Thomas Eakins's Gross Clinic," in Realism, Writing, Disfiguration: On Thomas Eakins and Stephen Crane (Chicago: The University of Chicago Press, 1987), pp. 42-43, 50. Eakins's abandonment of the sporting pictures by 1875 and his subsequent focus on more somber compositions such as Elizabeth at the Piano may relate to his own physical as well as emotional state. Late in 1873, in a letter to his teacher Jean-LÃ©on GÃ©rÃ´me, Eakins apologized for a long lapse in correspondence by explaining that he had come very close to dying of malaria; the onetime athlete thenceforth was susceptible to an illness that might recur at any time. Only a draft of this letter survives (Charles Bregler's Thomas Eakins Collection, Pennsylvania Academy of the Fine Arts, Philadelphia).