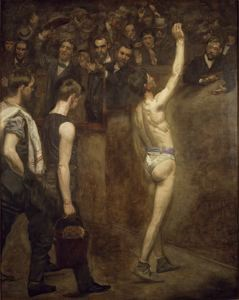 Late in the 1890s, Thomas Eakins returned to the theme of sport and male athleticism in his paintings. But whereas in the 1870s he had portrayed rowers, baseball players, and hunters who competed in the outdoors, Eakins now turned his attention to local boxers, who fought in shabby, smoke-filled arenas and gymnasiums in inner-city Philadelphia. Together with Samuel Murray and other friends, Eakins frequented the prizefights held at the Arena at Broad and Cherry Streets, diagonally across from the Pennsylvania Academy of the Fine Arts.1

Salutat, of 1898, is the third of three boxing paintings that Eakins produced during 1898-99: the others are Taking the Count of the same year (Yale University Art Gallery, New Haven, Connecticut) and Between Rounds, started earlier than Salutat but not completed until 1899 (Philadelphia Museum of Art).2 Salutat is a portrait of the featherweight "Turkey Point" Billy Smith, who is shown pausing to acknowledge the applause of the all-male audience as he exits the arena with trainers in tow. Smith was one of several fighters whom Eakins had befriended and who agreed to model for him. Eakins conveyed his own affection for boxing indirectly by depicting close friends and relatives among the cheering fans, most notably his father, Benjamin Eakins, who stands in the background at the extreme right.3

The full title of the painting, Dextra victrice: Conclamantes Salutat (With his right hand the victor salutes those acclaiming him), which was carved into the original frame (now lost), relates Eakins's composition to ancient gladiatorial contests and more directly to the paintings of gladiators popularized by his teacher Jean-LÃ©on GÃ©rÃ´me. Indeed, Eakins's composition and its title echo GÃ©rÃ´me's renowned canvas of 1859, Ave Caesar! Morituri Te Salutant (Hail Caesar! We who are about to die salute you) (Yale University Art Gallery, New Haven, Connecticut), which Eakins had seen when a student in Paris.4

By alluding to the classical past, Eakins countered the ambiguous status of boxing in American sports at this time. On the one hand, prizefighting was neither respectable nor fully legal, and promoters often had to move fights at the last minute to avoid the police. On the other hand, the 1890s saw the increasing popularity of physical culture, especially among male members of the upper classes eager to combat the ennervating atmosphere of the modern corporate workplace. Chief among the exponents of the "strenuous life" was Theodore Roosevelt, who disliked prizefighting but regarded boxingâ"the sweet science"âas an acceptable and suitably masculine form of exercise and civilized combat.5

Boxing and wrestling provided Eakins with an indisputably masculine subject matter, one that also permitted the portrayal of the seminude athlete. But whereas younger artists such as George Bellows would later depict the violent action of the ring, Eakins chose moments of pause for his trio of canvases, creating a troubling tension between the peacefulness of the painted image and the physical violence of the sport. Though Salutat is ostensibly the portrait of a victor, there is a somber irony to the gesture of the near-naked Billy Smith and the bowed heads of his trainers. By showing the boxer from the back in hidden profile, Eakins downplays his individuality. The fighter becomes an emblem of vulnerability in a dangerous world. "He is limited not only to precise time periods, but also to a carefully measured space in which to act," Carl Smith has written, "and he must confront the fists and body of an opponent. His sport involves physical punishmentâeven danger and possibly death. It is, after all, a fight, Eakins's deemphasis of violence notwithstanding.â6

3. The men in the front row include Louis Kenton (Eakins's brother-in-law), Clarence Cranmer, David Wilson Jordan, Louis Husson, and Samuel Murray. The identifications were made by Susan Eakins in a letter to Charles Sawyer, 23 January 1934, Addison Gallery Archives.

4. The frame was already lost when Lloyd Goodrich published his first monograph on Eakins; see Goodrich, Thomas Eakins, His Life and Work (New York: Whitney Museum of American Art, 1933), p. 189. Eakins usually exhibited the painting with the short title Salutat; in 1902 he exhibited it as Conclamantes Salutat at the Worcester Art Museum, Massachusetts, and showed it only once with the full title, at the Louisiana Purchase Exposition of 1904. While the title of GÃ©rÃ´me's painting was derived from the well-documented salute of the gladiators to the emperor at the start of combat (described by Suetonius), the origin of Eakins's title is unknown. No such invocation has been found in classical literature. For a discussion of procedure in the arena, see Michael Grant, Gladiators (London: Weidenfeld and Nicolson, 1967), pp. 63-78.

Described by the famed American art historian Lloyd
Goodrich as âone of Eakinsâ finest achievements
in figure-painting,â Salutat depicts the champion
featherweight boxer and frequent Eakins model
âTurkey Pointâ Billy Smith pausing to acknowledge the
applause of his fans as he exits the arena following
a successful bout. Thanks to Susan Eakins, the artistâs
widow, we know the identities of the spectators
witnessing the fight, including the artistâs father,
Benjamin Eakins, who stands in the background at
the extreme right. Visit the Museum Learning Center
to view Susan Eakinsâ 1934 letter and annotated
postcard image of Salutat.

Learning the Look: The Addison at 90