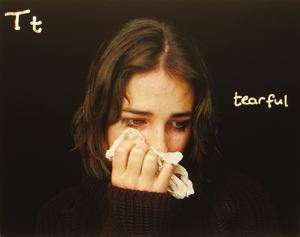 T from A Girl's Alphabet

Like most people, Wendy Ewald first encountered written language in a childrenâs alphabet primer. Later, she recognized that while the words and visual examples provided in the book reinforced her own experiences as a middle-class white girl, they did not do the same for everyone. To explore the disparities, Ewald embarked on several collaborative projects that encouraged students of different backgrounds to create primers that reflected their lives and worldviews. After working with African American and Latino children, she turned her focus to young women at Phillips Academy, of which she was an alumna. Words like âjacked,â âflirt,â and âweightâ were paired with images of cropped, often headless figures, as the students made connections between their sense of identity and body image.

I from A Girl's Alphabet
2007.30.9
Portfolio List Click a portfolio name to view all the objects in that portfolio
This object is a member of the following portfolios: